No other event compares to Pipe.

World title races aside, the wave itself provides a spectacle that is unrivalled in our sport, and no single title is more coveted; it’s our super bowl, our play-offs, and our world cup all in one liquid monster.

Pipe has so much rich history and respect that I feel stupid writing about it. Instead, I’ll leave it to a respected historian; Matt Warshaw’s encyclopaedia of surfing (subscribe here and thank yourself later) describes it thus:

Beautiful but ferocious Hawaiian surf break located on the North Shore of Oahu, regarded since the early 1960s as the sport’s premier tube; site of the venerable Pipeline Masters competition. “First it intimidates you,” Kelly Slater said. “Then you find the balls to give it a try. Then you figure it out, and grow from the pride that comes with that. Then you get hungry for it.”

Pipeline is best on a west or northwest swell, and like with the rest of the North Shore breaks most often from October to March. While “Pipeline” specifically refers to the left-breaking wave, it can also be used to include Backdoor, the right-breaking wave attached to the Pipeline peak that opens up when the swell comes in from the north or northwest; surfers will often take off side by side, one riding Pipeline, the other riding the Backdoor right.

Over the last few years, Pipe has switched from a goofy-footer’s wave, to one mostly dominated by those with the left foot forward, partially because the left is more forgiving on your backhand than the fast-running right. There are numerous guides to Pipeline, including surfline’s mechanics of pipleine, and the WSL’s breakdown with Gerry Lopes. Then there’s GoPro guides from Kelly, John and Seabass. There’s plenty out there if you look.

Our projections focus on data for reef breaks, in both left and right conditions, with a weighting towards results in this particular event with slightly larger waves (4′-8′).

The official forecast calls for:

…a very strong chance of well overhead surf, with a medium chance of double to triple overhead surf that would again favor Backdoor and Off-the-Wall (in the short term), as well as potential for back-to-back NW swells (on) the 12th-15th, consistent with size/timing close to the December average (overhead to double overhead at Pipe).

What’s all of that mean? There is plenty of swell forecast, and while not quite of the XXL variety that we crave, there should be enough to rattle a few ‘CT surfers’ confidence. Another point to note is that the swells may slightly favour backdoor, which could impact team selections.

John John Florence –  John’s IG feed announced that he’ll be a late withdrawal, citing ongoing injury niggles as the cause.

Adriano de Souza – Adriano’s knee injury, which he suffered in the shorebreak at Portugal, has forced his withdrawal from Pipe.

Kelly Slater – It’s funny that Kelly surfed this event last year, but has been injured for all other ‘ocean’ events in the interim. Anyway, it’s probably the one spot he has dialled nearly as well as his pool.

Caio Ibelli – Caio has been surfing in the Triple Crown events to rather modest success, but he’s done enough to prove that he’s not hindered physically by his ankle.

Seth Moniz – JJF’s replacement has been named as the young Hawaiian who’s so hot right now. Seth earned his place as the highest-ranked QS surfer from Hawaii, and comes with some decent Pipe credentials after having finished 3rd in the Pipe trials last year.

Wildcards – These won’t be known until the trials are held in a few days.

Seth Moniz will replace John John in the draw, but his final seeding won’t be known until all of the wildcards have been added. That said, He’s likely to be in H4 because of his QS ranking… 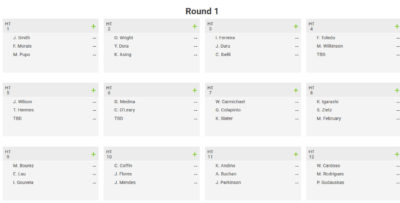 Empty space denotes event not surfed. Several previous wildcards have been included as a reference despite not being entered in the current draw. JJF left in as a reference.

Medina – His form is still excellent, his conditions and historical data for this event are excellent (except for that missing win…), and is seeded on the other side of the draw to the two title contenders. Medina is the favourite for this event.

Flores – Has a great history in serious reef breaks, with two Pipe titles and a win in Tahiti. Excellent tube rider, a decent seeding (with no qualification troubles), and plenty of reason to be confident.

Kelly – Slater may not be ‘match fit’, but his relationship with this wave is almost unrivalled. He made a few rounds last year on an obviously still-injured foot, so he would be a safe bet for a few heat wins again. His seeding is a worry, though…

Julian – Previous Pipe master, as well as a winner at Tahiti, with solid big-wave credentials. A little flaky with form, but on a decent streak currently.

Julian – Previous Pipe master, as well as a winner at Tahiti, with solid big-wave credentials. A little flaky with form, but on a decent streak currently.

Joel – Has been shockingly lacklustre this year, but looks to have renewed his focus for his swan song in Hawaii. Won at Haleiwa, and currently leading the Triple Crown. Pipe Master, solid performer here, excellent at Backdoor.

Kanoa – Two events to not a dynasty make, but with a semi and a final in his two Pipe attempts, he’s definitely made a solid start. Yet to prove himself in maxing lefts…

Zeke – He’s just won Sunset, and he has no qualification pressure to deal with at all. He can just focus on packing massive Pipe bombs, which he’s pretty suited to doing anyway.

Caio – He looks like he’s surfing fine on his injury now, but there’s a lot more to competition success than just a sound body.

Wilko – With only 5 heat wins in 8 Pipe events, an AHS of around 7 (that’s for 2 waves), and a winning percentage south of 30%, Matt’s fighting an uphill battle for requalification this season.

Wiggolly – with an win percentage of less than 15 across 7 heats, and an AHS of a touch more than 5, I’m willing to give Wiggs a miss. His form has been pretty lukewarm as well…

High End – I’ve called Jordy for the top tier sleeper for the past two events, and enjoyed a 50% success rate. He’s already packed a decent Pipe bomb last week, so maybe he could step up this year and better the two 5ths he’s managed so far.

Mid Range – Joan Duru has had an annus horribilis on tour this season, but he’s a certified tube hound. He’s a risk, but I need a sleeper to get me up the ranks…

Low – Guys like Parko and Kelly will dominate teams from this price point, so they are out as sleepers. Can Ian Gouveia back up his semi-final finish in 2017? Probably not, but you’ll look pretty clever if he does and you have him.

Wildcards – While most Pipe wildcards fail to make a big impact, there is still a history of the occasional big result from a JOB, Mason etc. We’ll reserve our excitement until we see the trials results.

Thank you to everyone who has signed up, played or given us feedback. We’ve already made some subtle changes on the back of your advice, and will make some much bigger improvements once the season wraps. It’s been fun getting players on board and putting the game through its paces, but we are looking for a much bigger and better fantasy game in 2019.

There will still be two fin sets available for those who play a team for Pipe (one for the winner and another for the player whose rank matches the Pipe winner’s jersey #), so sign up now, get picking, win some stuff and then laugh at me when you beat me.

It should be noted that, for the time being at least, surfer values have been recalibrated with JJF’s withdrawal and teams may have adjusted too during this time. If you selected your team early, before the final draw was released, please log back in and check to see if changes are needed.

Thanks again for a great season. Good luck with your fantasy teams, and #carnjoycey!