I often wonder how surfers, let alone the rest of the world, will receive surfing as an Olympic sport. Mostly I’m sure it will exist as a novelty highlights package between women’s water polo and the equestrian events. Could we hope for anything more?

Surely, if the best surfers in the world represent our sport on the world stage, it won’t be a complete embarrassment. Right?

The thing is, there’s no guarantee that the ‘best surfers’ will even be asked to attend.

Firstly, you can forget the ISA’s World Surfing or Pan American Games for now; the first and most immediate course for Olympic qualification is via the 2019 WSL Championship Tour. In short: make 2019 count, and the other events won’t have to.

Ten men and eight women will have earned their spots come season’s end, with a maximum of two male and female surfers per nation.

Currently four men (and all 8 women) have been granted qualification* to Tokyo in 2020, leaving just six men’s spots to be decided at Pipe.

If the tour was cancelled immediately, a la 2001, these would be the immediate WCT qualifiers as the points stand (bold represents confirmed qualification):

Did you notice any absences there? Kelly Slater? Filipe Toledo? Ricardo Christie? With Pipe to come, they’re not ruled out entirely (I lie; Ricardo is), but some have a less significant chance of making it according to the numbers.

Let’s take a closer look at the possibilities for each nation:

Kolohe can’t finish behind any of his countrymen at this point; even if John wins at Pipe, Kolohe will finish above him. That leaves one USA men’s spot to share between John John Florence (currently 8th), Kelly Slater (10th), and Seth Moniz (=12th).

The Pipe scenarios are thus: 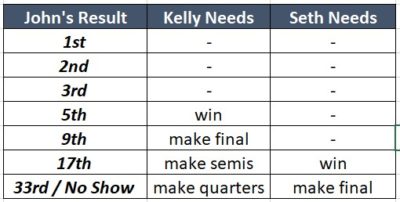 If John doesn’t surf or loses early, and Kelly and Seth duke it out at Pipe, Kelly needs a final to rule out Seth completely. Otherwise, Seth needs to finish 2 rounds above Kelly to overtake him.

Here are the Pipe stats for the USA hopefuls:

Isn’t that average place scintillating? Kelly needs at least a 5th, and his average (over 26 events) is better than 5th. In fact, Kelly has finished 5th or better in 76.92% of all his Pipe appearances.

With a lower average place (and no wins), Kelly gets the advantage over John. They are tied heat win percentages, and John gets the slight advantage with AHS. It’s worth mentioning also that John has four Volcom Pipe Pro QS wins at this event, often amongst stellar fields in pumping conditions.

Seth is certainly no slouch at Pipe, but his metrics are too limited to yield any resounding conclusions. He surfed his first Pipe masters in 2018 as a replacement for John John, beating Owen Wright in R2 for his only heat win before losing to eventual winner Medina in R3.

Verdict: Seth is such an outsider, it’s hard to take his chances seriously. With John already entered into the Triple Crown events, he seems genuine about competing in Hawaii this winter. Assuming he doesn’t re-tweak his injury, John seems to be in the most advantageous position. A few heat wins will make Kelly’s requirements more and more demanding. That said, Kelly still has what it takes to win heats at Pipe and could definitely rise to the occasion. I’m calling John by a chin whisker.

The Brazilian men’s race is probably the tightest of the lot, but somewhat less interesting given the lopsided contest. Italo Ferreira (1st), Gabriel Medina (2nd) and Filipe Toledo (4th) are all in the world title race with just one event to go, but Filipe has both history and mathematics to fight against (read here for full Pipe stats and world title preview).

Verdict: Filipe’s poor Pipe record and slight points deficit mean his chances are slim. It’s a shame for him, as the small beachbreak conditions of Japan would suit him well. That said, a two-time WSL world champion and reigning ISA world champion still make for a pretty solid Brazilian team.

Already looking like Olympic also-rans after a poor CT season and even worse ISA showing, Australia are full of possibilities when it comes to Tokyo. Excepting the possibility of winning a medal, that is.

Here is the list of potential qualification points for each surfer:

And here are their Pipe stats:

Having won both at Fiji and Teahupo’o, you’d be forgiven for assuming Owen was a solid option for Pipe. The truth is, he has never done particularly well. He has only made the quarters once (in 2010) and hasn’t won a single heat at Pipe since his injury there in 2015.

Julian is no slouch at Pipe, winning in 2014 and very nearly clinching his maiden world title by making the final again in 2018 (Gabe ruined his plans by making the final himself). His win % and average place put him in the upper tier of tour surfers and at the top of the Aussie hopefuls.

Rhino can’t be ruled out here. He’d need a break-through result to really stand a chance, but an early Julian loss would mean that he only needs two heat wins to farce a possible surf-off.

The Fiji and Teahupo’o winner seems fairly solid, with no glaringly bad stats. The truth is that he’s pretty rocks-and-diamonds at Pipe though, with five of his twelve appearances being winless. He will need to equal his best result here while also hoping Julian melts big time.

Jack definitely has the best momentum of this group coming into Pipe, but his poor record at Pipe and comparatively lower ranking make his Olympic chances as slim as his wife’s thong.

Verdict: Owen’s Pipe form opens the door for a sneaky shot from Ryan, but the highly unlikely requirement of a Rhino/Julian 1-2 in the final means that he should be safe regardless. Julian faces greater challenges if he falls to an early loss, but his Pipe record holds him in good stead to keep the wolves at bay. Owen and Julian through.

With Pipe maestro Jeremy Flores already booking his ticket to Tokyo, there is likely to be one spot remaining for all other nations, including France. Fellow Frenchie and Pipe Master Michel Bourez is comfortably positioned as the tenth and final WCT entrant into the Tokyo Olympics; Leonardo can’t overtake him, even with a win, while Joan Duru would need to win Pipe and Bourez to finish no higher than 17th.

What does all of this mean?

Barring some massive upsets or heroics, the list of surfers currently above the cut-off for Olympic qualification will be the ones most likely there at the end of the season. This spells good news for John, Italo and Michel, but sucks somewhat for Kelly and Filipe.

It also means that I have run all of these numbers for naught (mind you, some would argue that was the case regardless).

What about the other 22 Olympic qualifiers?

The first Olympic qualification slots were awarded* to Peru’s Lucca Mesinas and Daniella Rosas at the 2019 Pan American Games.

There are still 2 remaining Japanese ‘host’ places reserved, while seven women and five men will earn the final surfing places at the ISA event in May next year.

*All slots are provisional until the International Surfing Association final announcement at the end of the 2020 ISA World Surfing Games.