That sneaky bastard managed to steal the first wave of the day at the super-hyped KSWC event, despite his 6-months-out-of-the-water foot injury. He’s still a chance for Pipe, but I wouldn’t expect to see him in Europe.

We wrote that ‘Nat hasn’t been able to break out of R3 so far this year, and is still looking for a big result to help with his requalification’, in our last post. He then got a 25th at Trestles.

He hasn’t made it past R3 in his 4 appearances in France either, so he doesn’t have great form historically. He does have an OK AHS for the season (24th, above guys like Leo and Connor O), but his seeding will probably negate that small advantage.

It took a while to get a confirmation on this, but we’ve heard from several sources, including the boys at Lipped, that “the ‘Nu” will be back to defend his 2016 title here in France.

Keanu’s win last year was a bolt from the blue and you’d be hard pressed convincing anyone that he is a favourite this year regardless of previous results. Surprises happen though and, given that you can get a past champion for $1.5M, there are certainly worse options in the lower tiers/prices.

There were doubts about Kerr pulling out for undisclosed reasons (we actually think that an injury wildcard would be his best shot at a tour spot in 2018, but that’s another topic). Fantasy Surfer even went as far as making Jesse Mendes available as his replacement. We’ve heard that this isn’t going to happen and that was confirmed by the recently released draw (see below).

He was never in, it seems (see above).

Lacomare gets the Quiksilver wildcard slot, which doubles as a local wildcard (he’s French, oui?). This goofy-footer is definitely capable of an upset, but he’s had an interrupted season due to injury (March-April) and will be battling the big guns early with his low seed.

The Cascais events meant that the WSL was slow in getting info up for the event, but the draw is finally available: 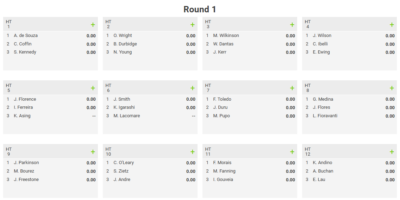