The cancellation of the Margaret River contest left many surf fans with a bad taste in their mouths. We lost all narrative tension regarding the contest rounds and emerging champion, we were starved of any real title race variation, our fantasy teams were all shot to pieces, the potential for a Mikey vs. Jesse heat was lost, and the surf media talked of little else but sharks and wave pools.

Then the Founders Cup came and went, leaving behind the kind of empty amusement that arises when we watch more for novelty value than genuine entertainment. I do plan to go into the Founders Cup in more detail at some point, as I have a few stats and observations from the whole spectacle, but there has been plenty of coverage and I’m over it at the moment. One thing the Pool did give us (me?), was the chance to remember what makes surfing in the ocean so special.

Interestingly, it will be the surfers who can read the ocean well and adapt to changing conditions who succeed in this event, which is the antithesis of a wave pool event. There was plenty of shade being thrown by man-made devices in the ocean vs. machine blood feud this past week, but now, at Rio, the ocean gets a right of reply.

Let’s have a look at the numbers…

Prior to the short-lived Margaret River contest, there were myriad event previews and break breakdowns in order to give fans a look at the conditions and wave types that make up the event. At Rio, we’ve been lucky just to get a heat draw let alone a detailed analysis (update: the WSL have provided a break breakdown today). Thankfully, I’ve got your back. Here’s an excerpt from Nick Carroll at Coastalwatch, in the lead-up to the 2017 event:

At one end of the beach there’s a long North Narra style left with a series of solid though slightly fractured sections, at the other there’s a right-hand wedge with plenty of muscle. Both spots are in the play for the event. Like Rio’s beachies, it’s exposed to heavy south groundswells which are common this time of year. Expect it to favour power and variety, with natural footers maybe having an edge in the right wedge.

Last year, the surfers were either rewarded for explosive above-the-lip surfing or maximising the long rides on the lefts. Surfers who have fared well at beachbreaks and smaller wave heights will be the ones to watch. Interestingly, there were 3 goofy-footers in the semis last year, but only regulars have won the event since it moved back to Rio in 2011.

Unlike the wave pool event, the official forecast is still a little in the air. There could be some action on day 1, followed by some lay-days before the new swell next week. It may be worth looking at surfers who can maintain their focus over an on-again-off-again waiting period.

Let’s look at the best picks for these conditions…

(It may seem like these are obvious picks, but it’s possible to have them all with the current WSL fantasy seeding…)

John’s won here twice in seven years, but his other results have been fair to average. He tops the AHS values for wave heights 1-4′ and 4-6′, as well as beach breaks, and left/right split peaks. What’s surprising though is that he only ranks 11th in his event AHS.

That event AHS stat? Gabby tops it, at a full point above Filipe. He also sits just below JJF in all of those other areas, namely 1-4′ waves, beachies and left/right breaks. He is 3rd in 4-6′ waves behing John and Jordy.

Adriano has the best average placing and heat win percentage at this event since it’s return to Rio: He has two wins, a runner-up, a third, fifth, 9th and 13th. Anyone who can average quarters or better over 7 years is worthy of your consideration.

ADS is also 5th for event AHS and beach breaks, 6th in left/right peaks and top-ten in 1-4′ waves.

Filipe is a previous winner, has a decent heat win percentage and the second-best AHS at this event. He also ranks highly in small waves, beach breaks and left/right peaks.

Alejo is fighting history here, with the worst AHS of all surfers for the event as well as a poor average placing (despite a 5th in 2012). He has the 2nd-worst average in both 1-4′ and 4-6′ waves and sits in the bottom-10 in beach breaks and left/right peaks.

Man, I feel like I pick on Wilko at times; he’s so often in this list. It’s purely objective though, as I just summarise what the numbers say. That said, it was utterly foolish to pit him against Jordy in the sudden-death surf-off at the Founders Cup. What were they thinking?

For Rio, Wilko has had 5 x 25ths in 7 years (it should be noted that he’s balanced them somewhat with two 3rds as well), and holds the fifth-worst average for the event (11.24 across 18 heats in five years). He also has a bottom-10 AHS in beachies, left/right peaks and 1-4′ waves.

Both surfers are winless at this event over the past 2 years.

While nobody can lay claim to a hot run of form at the two-round abbreviation of Margies, I was impressed with Italo’s win against his good friend Miggy in R2. Pupo scored an excellent ride early and was in control, but Italo kept his cool and surfed very well to claw the heat back. It was the sort of performance that gets you titles.

Almost won the Founders Cup single-handedly, surfing well across the whole event. I was particularly impressed with his surfing on the left, which could bode well for Rio. Jordy now has the highest AHS for the season, despite his low win percentage, and will be full of self-belief. For Jordy, this is usually a good thing.

Gabe was the form surfer at the Wave Ranch for my mind (besides maybe Carissa, and Kelly). Do you remember how hot his streak was last year after he won the Future Classic? It nearly won him a title. That’s kinda what I foresee happening here.

Alejo isn’t just some token local wildcard; he’s in the event because he’s leading the QS this season. Given that this is basically a QS venue, his potential could actually be greater than his stats suggest.

With Caio Ibelli injured, Ian now has the dubious honour of being the only winless surfer on tour this year.

Other than a solid R1 heat at Bells, Griff has been off the boil since his incendiary Gold Coast debut. There’s is such a steep learning curve for a rookie surfer, I doubt that this qualifies as a slump, but I for one hope we see him spring back into form soon. At least these conditions seem to suit him.

Thanks to some excitable marine life, John’s ace-up-the-sleeve event at Margaret River ended up offering nothing but a 13th place throw-away. John could have put himself back in contention, but is instead still languishing back in the bottom half of the rankings. Add to that a very tepid performance at the Founders Cup, and you’re looking at a deflated champion.

Does this rule him out of an event or even title win? Hell no. But I’m glad I’m not Ross Williams just now.

Our R1 “heat of death” nomination for this contest is definitely H4, with Duru stuck in a John/Mikey sandwich.

We are still waiting for the final wildcard to be added. 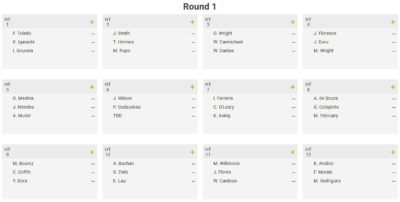 In the women’s draw, Courtney has been replaced by Pauline Ado, with the wildcard spot to come via the local trials.

Owen Wright is the ultimate sleeper this season and, along with Michel, is one of only two surfers without two throw-away events (nobody wants to use their Margaret River result). Could he continue to fly stealth and make a run for the Yellow Jersey?

Tier B is pretty stacked, so there’s a few contrary options available. I don’t know why, but I’m feeling Kolohe for this one, and I doubt he’ll be highly owned in the fantasy games.

If I said Yago Dora this time last year, you’d be thinking I was tripping. This year, he’ll be one of the most highly owned. Instead, I’m doubling down on Jesse Mendes; he’s surfing too well to keep losing.

Yago set the tour alight last year by mowing down consecutive world champions at this very event last year, but now there’s a lot of expectation riding on his shoulders. With only one heat win in 3 CT events, which Yago will we see?

Mikey looked great in W.A. He has a good seed for a wildcard too. I’m curious as to how the crowd will treat him though, as his beef with Jesse stirred up some passionate keyboard warriors. Maybe Mikey won’t give a fuck, but the Brazilian crowds are known for their parochial passion. Just ask Kolohe:

I had Leonardo Neves in the semis and the beach was packed. He was one of the guys to beat during that event. Our heat was pretty slow, so I started building scores. With 30 seconds left, he took off on a wave and did a bunch of turns. We both came in to the beach and were waiting for his scores and once they announced that he came up just short, everyone started booing me. It was pretty heavy. It’s one of those things I’ll tell my kids about — that everyone was booing me in Brazil. I was pretty stoked on it. Also, in my quarterfinal heat against Thiago Camarao, people were clapping when I fell. But it wasn’t too bad.

Rookie seasons are so unpredictable. We hope he kills it.

Jordy in chlorine vs. Jordy in a WSL tour event has been a massive discrepancy of late. He’s got a decent record at Rio, so I think he could start turning his season around from here.

Two former tour surfers, both goofy, who can run riot through an event when they’re on. Dangerous.

We still don’t even know who the final surfer will be. That’s got to be an outlier.

We haven’t be selecting any ‘numbers’ or ‘stats’ teams at this point in the season, as we’ve been putting all of our focus towards our own game.We’re actually about the have our first look at the initial site build this week, so things are looking up. If the tests go well, we can start importing our stats and push towards a release.

Admittedly, the process is taking longer than we hoped, but that’s only because we are creating something that exceeds all of the current gaming models, and we’re making sure that it’s being done right.

We’ll be sure to let you all know when it’s open for some beta testing. Have you registered for Fantasy Surf Sessions yet?

Again, I’ve been avoiding this where possible this year, but if you can spare some small change for site management costs, I’d be super-grateful. I want to give a massive shout-out to Bryan McMandon, who lives in Nicaragua and showed a great deal of generosity in helping us out; champion effort mate.
See all articles
Go to Top