Personally, I thoroughly enjoyed the Rio contest. And, while my fantasy teams were only moderately successful (Jordy, John? What’s up?), I think I know where my heart lies when it comes to surf contests.

Other than a close call against Keanu Asing in R3, Filipe was a class above the rest of the field for the entire event. Much like Italo in Bells and the Sharks in WA, Filipe was on roll that the rest of the tour were helpless to prevent. He had the only perfect 10, 3 of the top-4 highest heat totals, and the highest AHS for the contest.

He’s currently ranked  a close 2nd behind Julian for the title, and there’s not a great deal between them. Both are high-performing under-achievers and long-suffering bridesmaids to the world title. 2018 could well be a title race for the best to never have won. Taj should get some wildcards.

Did anyone else find his Piping Hot wetsuit amusing? I keep half-expecting it to be a joke. What’s their wetsuit technology like, anyway? Wade’s no joke though; he was a cool as ice throughout the event and is now leading the ROTY race above MRod and Griff respectively.

Wade also stood out for his streamlined approach to tour life. There was a moment when the live feed crossed to the ‘coaches” area, only for the commentator (Kaipo?) to declare that Wade had an entourage of one: himself. What? Nobody? The WSL posted this:

“The modern professional surfer tends to have a fairly large support team. Parents, coaches, team managers, shapers and filmers often provide an integral mobile framework that allows each athlete to perform at their peak. In Brasil, though, Wade Carmichael chose a more solitary approach. The Australian traveled, roomed and freesurfed in Saquarema on his own, backing his own judgment, heat strategy and knowledge of his equipment. It showed a man who is supremely confident in his own skin and whose calm authority is all the more remarkable considering his rookie status. It also pushed him up to World No. 5. The lone wolf is now hunting in the top pack.”

How cool is that? It makes some of the other guys seem downright soft.

A record-breaking win. Steph now has the same number of event wins as Layne Beachley, making her the equal all-time leader in women’s surfing. She’s a very real chance of equalling Layne’s 7 world titles too, if she can continue her amazing season.

I loved her quote too: “I just want it, I want it really bad. That’s what changed.” Anyone who remembers how much Steph dominated when she was hungry a decade a go would be ready to hand her the title now.

It’s virtually a two-horse race for the title at this point, and with both Lakey and Steph still in the Margaret River / Uluwatu contest, it’s pretty tight. Lakey has been on fire this year, and she could be the only thing that potentially stands in the way of Steph’s first title in four years. She must be cursing the timing of her new-found hunger though, surely.

After a shaky start that included another loss to Mikey and a narrower than necessary win against Deivid Silva, John seemed to have shrugged the competitive monkey off his back at Rio. He kicked Pupo a second areshole in R3, and was looking the goods for a shot at redemption.

Then they moved the contest.

The intermittent lefts of R4 were not as kind to John as the heaving rights at Barrinha, and that one round, four heats that could have waited until another day, were enough to throw him back into his poor run of form. Where was the two-times-winner of the Rio event? Where was the two-time world champion?

John benefits greatly from the fact that the WSL are finishing the Margaret River event. Sure, Uluwatu isn’t his playground like MR is, but we all know he can surf barrelling lefts. Most importantly, it gives him the opportunity to turn a throw-away result into a shot at title redemption. I’ll reserve my predictions on John’s season until after that event is run.

Has Wilko’s skidmark of a season taught him nothing? Has he been blind to John’s post-chin-fluff-removal form nosedive? Hair is power in professional surfing, and he who fucks with it gets their just deserts. Wade’s onto something, methinks.

Really? Losing to Ian Gouveia in thick, barrelling rights? Didn’t he know that Ian had a perfect record to maintain?

It was Tomas and Griff at the Gold Coast, Pat (he counts as a born-again-rookie, right?) at Bells and Wade in Brazil. There are 3 rookies in the top 12 right now, and several of them are still in the fight for the Uluwatu River event. That’s not even mentioning Mikey Wright’s dominance, Ian’s spanking of Jordy, or the fact that Willian Cardoso hasn’t lost in R2 all year (unlike JJF, ADS, Owen and many others). The rookies just aren’t scared anymore, and the tour should be on notice.

Missed some quality waves here at Brazil. but dropped an impressive Search video to show us he’s doing OK.It actually made me realise, possibly for the first time, that Micks backhand is pretty lethal. And that I was probably ignorant of this fact because there aren’t any performance lefts on tour.

He’s still ranked 11th, above Griffin, John, Adriano, Jordy and Joel and should be, as far as I’m concerned, the ‘nude run’ benchmark for the end of the year: either finish the season ranked above Mick, or streak the length of the beach at Pipe as punishment.

The ‘revised scale’ that encouraged surfers to push the envelope or suffer the consequences was truly thrown out at the wave pool. They were juicing everything, from easy half-barrels to flat airs and 17 backside floaters. It was ugly. But, it wasn’t a tour event and I figured that Pritamo would reset the scale and resume his demands for performance once Rio started. I was wrong.

While Filipe deserved his 10, and his 9.93 was pretty incredible, most of the contest saw 7s that would otherwise have been lucky to make the good range at other events. I’m not sure if it was just a Founders Cup hangover, if they were just surprised to see barrels at Rio, or if it’s the new normal. I hope it’s the first of the three options.

Credit where it’s due though, there weren’t any decisions that made me question whether the best surfer progressed.

It was a bit of a B-team feel, but it wasn’t too bad. Potz was Potz, Pete was Pete. Cote was fine except for his 540 bullshit. There was another guy, but his name escapes me. I barely heard much as it went into the small hours Sydney time, and I was playing it softly so as to not wake my kids.

540 – degrees in a full-rotation, according to Chris Cote. He and I had a polite clash of views on Twitter, including a moment where he admitted that he considers a ‘straight air’ a 180, but I was unable to change his mind. He was still wrong though.

3 – rookies in the quarter-finals at Rio (Yago, Wade & MRod)

8 – total points across 2 heats for Conner Coffin. Yep; that’s the combined total of his 4 best waves.

6 – full days until the Keramas event.

Best wave: It was tempting to put a certain air in this spot, but I was looking for a more complete wave. Most of the top-scoring waves for this event were based on a single air or barrel, all of which were incredible. Filipe’s first wave in his QF against Kolohe had more. He comes out of a good barrel, celebrates by burying his rail in a way that would make SurfCore2001 take notice, and then scores a couple of smaller manoeuvres on the inside. Complete.

Best heat: The R2 barrel-fest that was Joan vs. Seabass was amazing. Both surfers got incredible waves, and it was super close. In the end, only a fall on Joan’s massive post-barrel, end-section floater cost him the heat by 0.2 points.

Best Manoeuvre: Come on now, don’t be shy. We all know Filipe had this in the bag with his backside, full-rotation, no-grab, 13-foot-across reverse air (how’s that, Chris?). How many times have you watched it? Notable mentions go to John John, and Ian. Yes, Ian Gouveia.

Most impressive: Filipe dominated almost every aspect of this contest. It’s a no-brainer.

Back by popular demand, arranged by tiers: 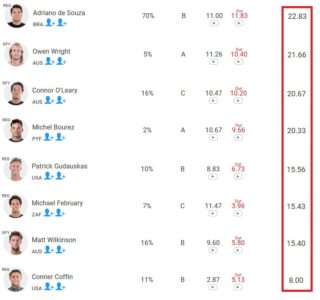 Thanks for again for reading, the Bali data will start to drop in a few days!