Then R3 came along and we saw smaller, but cleaner waves which allowed for the big 3: barrels, airs and heavy turns. Upsets were happening, Cloudbreak was no-longer making heroes of men and Keramas was looking like a picture of which a wavepool could only dream.
By R4 we were seeing paddle battles, incredible surfing and some serious momentum.

By the Jordy vs. Italo QF, we were all hooked. So much so, that I nearly posted this without mentioning how bored I was at the start; Italo had erased all of the negativity from my mind.

I declared after Bells that Italo may just be my new favourite surfer. He certainly tried to live up to that this past week. Can you honestly wish for anything in your own backside surfing that Italo lacks? Speed, check. Power, check. Innovation, check. Flair, check.

I was worried that the wheels were falling off after his tepid performance in Rio, but he came back with a bang to win his 2nd ever contest and steal back the Yellow Jersey. He’s still in the draw for Uluwatu too.

Did you read my Bali Pro preview? I dropped the following recommendations in my sleeper picks section:

Michel Bourez knows reefs and barrels like few other tour surfers. He finished runner-up at this event in 2013 and could be a nice sleeper for 2018.

Do you remember the way Jeremy Flores deftly wove his way through those crumbly backdoor tubes to snatch victory from John John last year? Jeremy can be a bit up-and-down at times, but Keramas plays to his strengths.

Did you have them?

Like Italo, Michel suffered a poor Rio result but rebounded with energy in Bali. His timing, patience, wave selection and power were all top-shelf. He has also made the quarters or better in 3 of the 4 completed events this year )and is still in the draw at Ulus), so he’s definitely a sleeper for the title.

Who else is enjoying the tight race for the title in this year’s women’s tour? Lakey has been so driven and focused this year, but I can’t call it between her and Steph at this stage. She fumbled a little in the final, but luckily for her Tyler didn’t make her pay.

You can only defend John for so long.

He is killing his freesurf sessions, but looks unenthused in a jersey. Come back to us John, we miss you.

Update: John has taken a leaf out of Kelly’s book and decided to gain an injury in the hope of assuring his own qualification for 2019. It’s great news for Mikey Wright, who gets an easy win at Uluwatu as well as an increased chance of a wildcard in future events. It’s bad news for Caio, who was relying on a wildcard place after missing 3 events. Rumours are circulating, but there has been no official word on how bad or how lengthy the injury will be.

I nearly picked Chloe for my Bali team, but went with Flores instead. Thank god. He’s always run hot and cold, but he’s looking particularly luke-warm this season.

Jordy could easily have taken this event, had it not been for the rampaging run of everyone’s favourite surfer. He looked head and shoulders above the Jordy that we’ve seen for the past 9 months, so I’m almost excited to see if he can build some momentum. Almost. It is Jordy, after all.

The best thing about Jordy at this event though was his R4 clash with Medina. It was an old fashioned paddle battle, complete with stray fists and kicks throughout. I have no doubt that it cost Medina the heat, as the next set that rolled through would have offered him an opportunity that could have converted had he held 2nd priority. His post-heat interview is definitely worth watching on heat analyser (its in R4, H4)

Wilko broke out of his funk in R3 to surf the best heat of his season against Griffin. He still lost. Rodeos don’t win heats.

Griff is back in the ROTY lead after a brief hiatus. He looked like he was having fun out there, and that’s when he is at his most dangerous. Griffin could definitely continue to do some serious damage on tour, so long as he doesn’t take it all too seriously.

There were a few scores that were questionable in this contest, which is a shame as the year had been mostly clean for the judges thus far. I don’t want to harp on, so I’ll just focus on the most egregious:

Jordy’s 9.57 was definitely over-scored. It was less than 3 minutes into the heat and, while the barrel was very good, his conservative safety-cut-back-to-safety-snap follow-up did not deserve such a massive number. The judges painted themselves into a corner, especially since they had set a precedent for only rewarding committed manoeuvres after the barrel.  When the judges then followed it up with a low-ball score for Filipe, it seemed to play on the Brazilian’s mind. He crumbled and we were unnecessarily robbed of an epic battle.

It seemed that nobody caught Cote fever in South America; I didn’t hear a single reference to 540s, despite a few massive rotations being stomped. The undoubted highlight in commentary for me at this event was Strider; a guy who’s honesty cut through the WSL corporate façade a few times. He questioned the judges’ sense in giving Jordy a 9.57, he told it straight when he thought the conditions were poor, and he felt more and more like someone who forgot to stop being themselves once the cameras roll. We need more of it.

Strider’s natural style was juxtaposed awkwardly with Kaipo’s complete avoidance of any genuine interest in Jordy’s clash with Medina. Instead of exploring the heated emotions or burning hatred, he merely changed the subject with a reference to Jordy’s passion.

2 – career CT event wins for Italo, both this year. It’s also the number of places he jumped on the leader board (he’s leading again).

1 – goofy-footers into the quarter-finals at Bali, after having 4 in R4. We goofies need not have worried yjough; Italo carried the weight of our hopes and dreams with ease.

18.87 – Italo’s two-wave-total for the final just kept building, much like his form through the event. Not only did his heat total top the men’s draw, it also set a new standard as Italo’s highest CT career heat score ever.

3 – the number of different tour leaders we had throughout the event. It was Julian, until the quarters when it was Filipe, until the final when it was Italo. Tighter than an otter’s pocket.

3 – the number of onjured surfers who are likely to be vying for a slice of wildcard pie next year. It’s a pity there’s only two spots.

Best wave: Sure it could have had a few less claims, but when you land a perfect tail-high, full-rotation backside reverse air and follow it up with excellent turns, I guess you’re allowed a few claims. The pop-shove-it-to-revert at the end was just the icing on the cake. Italo’s 10 was the wave of the event, and there were plenty of good waves at this event.

Best heat: Griffin vs. Wilko in R3 was pretty tight and very entertaining, certainly worthy of the best heat title. That is, until Italo went to town in the semi-final against Jordy. What a heat! The two form-surfers of the event going head-to-head.

Best Manoeuvre: Bourez was definitely tearing the heads off some waves, and Italo could easily lay claim to this title via his best wave air, but I’m giving it to Jordy Smith. Whether you want to give best manoeuvre for his smooth, full-rotation air reverse OR for his kick-out-to-school-yard-fisticuffs paddle battle is up to you. Both were great to watch.

Most impressive: This was Italo’s in the end. There were moments when I thought Jordy had it in the bag, but Italo’s surfing, claims, switches and straight-up-positivity put him over the line.

The men’s tour has been spread across five eligible contenders, with a noticeable gap between Gabe and the rest of the field.

On the other hand, the women’s tour is boiling down to a clear two-horse race. Tati/Tyler/Carissa need a win or two if they are going to become relevant.

It’s still early days though, we’ll be analysing the whole thing in more detail after Uluwatu.

Back by popular demand, arranged by WSL tiers.

It should be noted that 15% of WSL fantasy players had Slater. 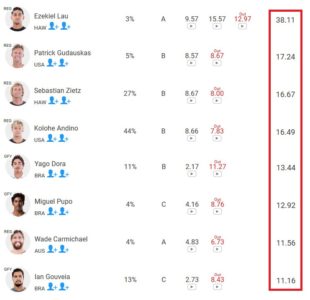 That’s it for now. We have our Uluwatu/Margaret River mini-preview up here if you want to check it out, and we’ll have another wash-up once the event is done, including some title race insights.