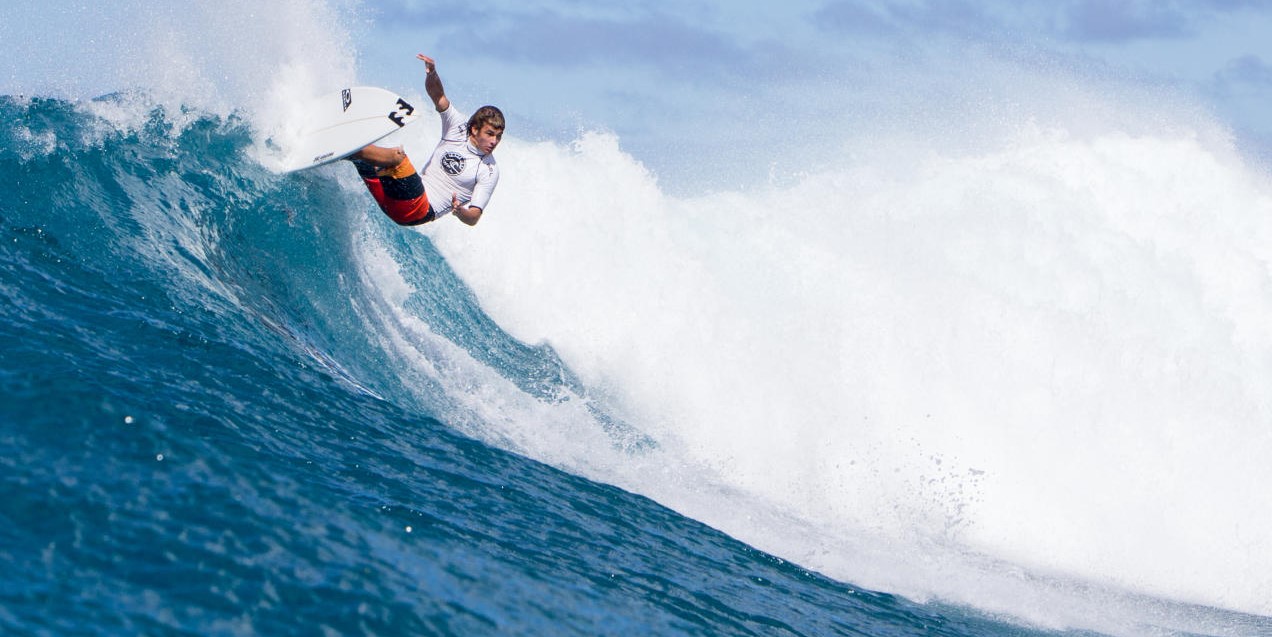 It’s a quick turn-around from the Pipe hyperbole, up the Kamehameha Hwy, and on to the Hurley Sunset Pro.

There’s ironically no time to waste on needless intros; let’s do this.

Sunset has been promoted from QS/Triple Crown staple, back to CT jewel.

We haven’t seen it on the CT tour since it was demoted after Jake Patterson beat Andy Irons, Shane Dorian and Taj Burrow way back in 2003.

In case you need reminding of exactly what to expect, we thought we’d hand over to the majesty of Mr Encyclopedia of Surf himself, Matt Warshaw:

A vast wave field and endlessly shifting peaks mean that surfers have to paddle almost constantly to get into takeoff position, and often get caught inside; the tradewinds blow hard on this particular stretch of coast and hit Sunset side-offshore, which can make the take-off even more difficult. Crowds are also a problem. Few breaks in the world put a greater demand on a surfer’s fitness, as well as his strategic and tactical know-how, and even the world’s best often leave the water in boiling frustration. But the classic Sunset ride is long and exhilarating, as the wave whorls and explodes, then flattens and tilts back up, sometimes running through four or five distinct stages as it moves across the reef. “It’s fabulously imperfect,” San Francisco sportswriter Bruce Jenkins once noted. “It can give you the ride of your life, but you’ve got to earn it.”

The WSL don’t have many guides for Sunset along the lines of their ‘Breakdown’ or ‘Vision’ series, but we did find an old Mechanics of Sunset Beach, and they do have a handy overview of the event here.

For the purposes of our data sets, we run Sunset as a right-hand reef break with a 6-8′ average. So pick your teams accordingly.

The WSL have finally added their official forecast to the site, which mostly reflects our earlier predictions:

Alternative forecasts paint a picture of contestable-if-somewhat-small (around the 6′ mark) swell with favourable winds for the first few days. They may look to potentially run some non-elimination rounds in the hope of hitting some more juice later into the event window.

The men’s and women’s draws were posted with less than 48 hours until the event was due to start. As predicted, Liam O’Brien (broken leg), Yago Dora (foot), and Carlos Munoz (shoulder) are all out. Gabriel Medina has extended his delayed start as well.

The good news is that both Ryan Callinan (wrist) and Kelly Slater (mind games) have confirmed their places in the draw.

Replacements Matthew McGillivray, Caio Ibelli and Jordan Lawler will get their second shot at tour points for the season, while local chargers Billy Kemper and Kai Lenny will forgo a spot at the Nazare tow event to take the wildcard spots.

All data drawn from the 2013-2021 seasons, excluding 'Pipe Events', which is for the duration of the surfer's career.

Pick ’em – put these surfers on your fantasy teams

John John Florence – Could John at Sunset ever match John at Pipe? Possibly. He’s a dead-set favourite at this spot.

Jack Robinson – he may have underperformed a little at Pipe, but Jack has proven form here at Sunset.

Seth Moniz – 2nd in the world, solid in reefs, brimming with confidence. Put him on there.

Ezekiel Lau – we warned that Zeke wasn’t great at Pipe, and we were pretty on. Now we’re going to tell you that he IS good at Sunset. Zeke’s surfing and results here over the years basically pick him for you.

Joao Chianca – Joao landed on the map at Pipe, with an impressive debut. He’s not done yet in our opinion.

Kelly Slater – hear us out; Slater may be overpriced for Sunset, given his inability to ever win an event here (he’s made a few 5ths). If you’re really keen to delve, check out Swellnet’s analysis here. There’s also a fun video below.

Deivid Silva – looked wobbly at Pipe and doesn’t have the big wave data to make me confident in a return to his Barra form.

Lucca Mesinas – there was some formidable talent, but also a little luck in his Pipe result. Backing up will be hard.

Filipe Toledo – maybe I was being too contrarian by suggesting Filipe for Pipe, but this time it’s a bit more justifyable. He won Margies last year, and he’s won Haleiwa before too, which isn’t Sunset, but did require him to overcome Bourez and Smith among others in the Hawaiian juice.

Ethan Ewing – the seeding is stacked for this section of the draw: Jordy, Jack, Griff, Conner, Frederico, Zeke. All could do well, but all will probably be on a few teams. Ethan could be just the right mix of raw talent with under-the-radar appeal.

Imaikalani deVault – after a 33rd at Pipe, he may look like tainted goods, but Imai can surf Sunset well. Redemption is on the cards.

Make sure you check out our surfer stats comparison feature, join a clubhouse, and motivate yourself with our awesome prizes while you’re here tweaking your team.