We needed something to fill the void after the Margaret River Pro fiasco.

While the quasi-Olympics-team-event isn’t a part of the tour, its novelty and immediacy put it slightly above the Oi Rio Pro when it comes to quenching my pro surfing thirst. Plus, there’s a guarantee of no sharks.

So let’s grab a shitty American beer, take a spot in the bleachers and cast our eye over the Founders Cup…

Believe it or not, the name is derived from a reference to ‘celebrating the past’ through recognising the Founders of professional surfing, a concept which has barely rated a mention throughout the promotional push and will probably only receive a passing reference on the day. It’s also interesting that they are only recognising the founding fathers of the sport, given it’s a mixed-gender teams event.

There are 5 teams, arranged by region:

*Taina is Brazil’s only weak link in an otherwise very strong team, it will be interesting to see if TWW gets an 11th-hour call-up…

*Leo and Frankie get spots, despite being ranked lower than Joan Duru and Pauline Ado respectively. This is most likely to minimise what would be an overly heavy bias towards French surfers

The WSL explains the competition format as thus:

Qualifying rounds will be held on the Saturday, while the finals will be on Sunday.

There are no tour points or massive cash prizes for the winners here, but there are two individual prizes on the line:

The athlete who achieves the top wave score over the course of the contest will win a Jeep vehicle.

In line with the ‘founders’ theme, Quiksilver will be awarding the best air of the event with a replica of a Simon Anderson Thruster. They hope to highlight the most progressive manoeuvre of the event with an unrelated reference to equipment progression from surfing’s history.

The event will be held at the KS Wave Ranch, which is located at Leemore, California. It is a 2,000 feet long and 500 feet wide man-made lake originally built for water skiing. There is a pretty poor overview available here.

The wave is created when under-water hydrofoils run down a track at around 30 kilometers per hour, making artificial waves rise up and push across the pool. When the swell hits specific areas of the lake’s bottom, the wave starts to break thanks to the influence of the contour reefs. Waves at the Surf Ranch can reportedly reach a face height of 6.5 feet, but they can also be adjusted to create variations for surfers.

Giant lateral gutters dampen the bounce-back effect that occurs on the pool walls, however it still takes three minutes for the pool surface to calm down and return to a completely static state. The nature of the wave also means that it is impossible for both the lefts and rights to be offshore at the same time.

You can delve further into the science of the wave here.

While there was the secretive and semi-experimental Future Classic test event held last September, there is no real precedent for this event so far as data and results. The results for that event were as follows:

The WSL have provided the following snapshot to use as a point of comparison amongst teams: 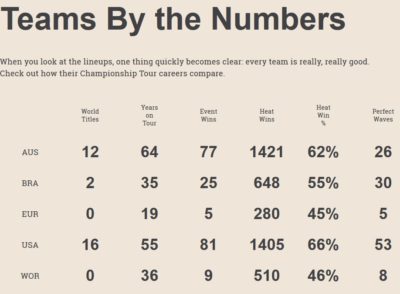 We are still building our database on women’s historical data, so we weren’t able to run the numbers on each team in full. We did manage to filter through our men’s stats though, and we have this simple overview for comparison, including our own ranking based on an algorithm that we are refining:

While Australia have a strong women’s team, they have gone with experience over progression in their men’s squad. A fact that even Mick Fanning himself recognises. Wilko could probably be replaced by Mikey Wright and I would take them more seriously, but as they stand they lack the wow factor to take the whole competition. I believe that they will make the finals day, but finish 3rd.

The Europe and World Teams don’t have enough depth (and the wrong body type?) to really challenge the big names and will be lucky to make it to the finals day.

The real battle for this event will be between Brazil and the USA:

Kelly has the place wired, and John is still the best surfer on the planet despite his recent form slump. I’d have liked to see Griff replace Kolohe, but that’s their team’s only (mild) weakness. Carissa and Lakey are both top contenders out here.

Medina and Filipe went 1-2 here last year, and will be hard to beat this time round. ADS was lucky to hold his place over current tour leader Italo, and this could cost the team. Silvana Lima has dropped some great edits at the pool and will surf well, but they have a fairly weak option for a 2nd female surfer, with QS struggler Taina. If they could swindle newly crowned Brazilian Tatiana to step up and fill out the team they’ll be in with a massive shot, otherwise their lack of depth could cost them.