If J-Bay is one of the most respected waves in the world, then Teahupo’o has to be the most feared. Surfline’s slightly dated but incredibly detailed ‘Mechanics of Teahupo’o’ gives an insightful overview as to the background and physics of this incredible break. Kelly also weighs in on the analysis with his latest ‘vision’ series video.

As usual, we have a tl;dr overview:

Teahupo’o’s unique very-deep-to-super-shallow bathymetry makes for a short, intense left-hand reef-break that can range from small and playful to career defining. Barrels are definitely the main scoring option, but there is potential for  surfers to throw down manoeuvres when the swell backs off. Unlike Fiji, locals and trials winners have traditionally done OK out here. Irrespective of the swell size, Tahiti rewards surfers with good wave selection, the ability to read the wave and adjust accordingly, and of course, a solid left-hand reef game.

The official forecast is still yet to drop, but we’ll keep an eye on things and update when we can. At this stage, it looks like the first two days of the waiting period could be small, with unfavourable winds. Sunday and Monday could see a little spike in swell, with the potential of some rounds running. Overall, there’s nothing major swell-wise in the short-to-mid-term.

Update: the Surfline forecast is now up, and it reflects what I’ve already written above, but with a slightly more bleak outlook for the long-term:

What does that mean? Well, Filipe will be psyched, and goofy-footed surfers will be cheering as well.

BTW, Tahiti is a massive contest as far as the season is concerned. Don’t believe me? Check this article on the WSL, specifically the line:

Since 2010, the worst result any World Champion has received in Tahiti in a title year has been a 13th. That was Adriano de Souza in 2015 and even that result was an outlier. John John Florence’s 5th place last year is the next worse. Meanwhile Kelly Slater (2010, 2011), Parkinson, Fanning, Medina and Florence in 2016 all achieved a Semifinal finish or better in their World Title years.

It’s being billed as Filipe’s chance to prove his worthiness as a world champion contender, while it also traditionally spells the beginning of Gabriel’s strong run home. Italo’s injury could also play a part in the result. Either way, once this event’s wrapped, the world title picture will have a much clearer resolution.

Kelly Slater –  This whole injury/withdrawal business is getting real old, real quick. It has been dragging on since his 12th hour announcement at the Gold Coast, and has been played out in different guises across every event except those that stroke his ego (i.e. a shot at Founders Cup glory and a well-publicised ‘return’ to J-Bay). I had my suspicions about Kelly’s attendance at Tahiti when Mikey was left out of the draw and the trials without any announcement or reasoning, suggesting that the WSL knew he would be replacing Kelly all along.

Now we have an uncomfortable situation whereby Caio Ibelli, who has a legitimate injury and a rightful claim to a wildcard spot in 2019, will be vying for one of two available tour positions against JJF and Slater in 2019. After seeing the yo-yoing games played by Kelly so far this year, I’m inclined to think that Caio has more of a right to the spot than the G.O.A.T., who could surf but is choosing not to.  I doubt the WSL will see things that way.

John John Florence –  John has never won a Tahiti contest, despite being one of the best surfers to compete here in recent years. Unfortunately for John – and us – it looks like 2018 will be another lean year. John’s IG account posted the news a week or so ago that he had been diagnosed with a “high grade partial tear” to his ACL, and that his recovery would take “60 days or 120 days, or less or more”. He’s been exploring other pastimes such as sailing and long-range paddle-boarding.

Caio Ibelli – Caio’s definitely out of the draw. He’s still working on his recovery and hoping to god that Kelly can requalify from the remaining 5 events so that he’s guaranteed a wildcard spot in 2019.

Update: Mikey is in now (see below)

Mikey Wright – Mikey takes Kelly’s spot (see above), and he seems pretty psyched to get out there amongst it.

Italo Ferreira – At this stage, Italo has given no indication otherwise. Optimistic reports say he should be fine, and his latest Insta post gives me hope, but keep an eye on him close to lock-out.

Dare I suggest cynicism at his entry again?

Miggy Pupo – Miguel is next on the replacement list based on 2017 results. Do you remember his R1 Pipe bomb at the end of last year? I bet he’s hoping for a little more of that mojo next week.

Wiggolly Dantas – like Pupo, Wiggs is here based on his 2017 rankings. He’s had a few starts so far this year, but – like Miggy – he’s yet to achieve anything impressive. He’s also languishing at 55th on the QS at the moment.

Trials Winners – The trials contests for this event are often worthy of a live feed themselves, so tune in if you get the chance.

Update: Mateia Hiquily and Tikanui Smith have been added to the draw. Both are local shredders with very little competitive success under their belts. They beat 3rd-placed trialist and former winner Bruno Santos this week, so they’re are the ultimate dark-horse picks.

Update: with Kelly out, Mikey in and the wildcards added, the final draw looks a little different: 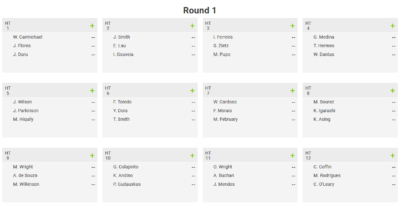 We’ve got all of the relevant surfers’ results from the past 7 years, including Wiggolly and Miggy, as well as Mikey and Bruno just in case they get wildcard sports.

Five-and-a-half seasons’ worth of data crunched into a sortable table. Choose what you think is relevant, and go nuts.

Gabriel Medina – with Kelly and John out, Gabriel stands head-and-shoulders above the rest of the field. He leads for the event AHS, 4-6′ conditions, and reef breaks. He’s 2nd best in lefts and 6-8′ waves. He also has the the best average result out here since 2010. Gabe is the closest thing to a sure bet that you can get for this event.

Jeremy Flores – Jeremy averages a QF or better result here, with an event title in 2015 the highlight. Flores is also a Pipe champ, so he knows how to ride a backside tube. Of the 2018 field, he averages 2nd in event AHS, 2nd in reefs, 3rd in 6-8′ waves and 5th in lefts.

Owen Wright – Owen’s placed in the top 5 for event AHS, 4-6′ waves, lefts and reefs. He also sits just behind John for the average place result at this event.

Wade Carmichael – I love the guy, I do, but I’m not putting him anywhere near my Tahiti team. He has truly poor averages in both lefts and reefs, as well as a R1 heat against two French tube maestros in Jeremy and Joan.

Tomas Hermes – to be fair, Tomas hasn’t done a lot since his surprise success at the Gold Coast. His data for this event looks particularly damning.

Filipe Toledo – That Toledo, he’s so hot right now. Other than a 13th at Bells, Filipe has made the quarters or better for every event this season.

Kanoa Igarashi – Kanoa looked electric at the US Open, which, given the Tahiti forecast, could have more bearing on this event than we first imagined. Kanoa’s run at J-Bay was pretty impressive as well.

Jordy Smith – after a massive run of 13ths across the 2017/18 seasons, Jordy has finished in the quarters or above in his past 3 events. He’s currently ranked 5th in the world and is still an outside chance to challenge for a title. Very outside.

Italo Ferreira – He was scintilating at Keramas. Then he stumbled at Uluwatu (alarm bells), and bundled out very early at J-Bay. He was looking OK at the US Open, but then copped an injury. Not the best lead-up to an event.

Joel Parkinson – even a retirement announcement couldn’t stoke the competitive fires enough to get Joel past a 9th place at J-Bay. That said, it was his best result all season.

Pat Gudauskas – Pat’s 3rd at Bells is looking more and more like a statistical anomaly as it gets buried deeper and deeper beneath a shitload of 25ths.

Matt Wilkinson – the new Wilko is pulling out some old Wilko form for 2018, with his poor CT results compounded by a 73rd at the US Open last week.

2018 has seen some seriously dark-horse selections do well. Are you prone to a risky flutter in the hope of mining gold? Or do you play things safe and stick to the numbers? Here’s our indefensible list of contrary selections:

High End – Gabe and Julian are the obvious selections, while the chances of Willian/Wade/Filipe succeeding are less assured. Do you dare pick against the favourites? If so, we think Jordy is the best option. Bourez has been ripping too. Since anyone with killer videos before an event usually under-performs, we’re going with Jordy.

Mid Range – Yago Dora could surprise a few out here, and I would be surprised if many selected him.

Low – Cancel that, I just checked his stats and recoiled. Plus I listened to the Lipped podcast, and I’m all over Connor to do well in the smaller waves after re-discovering the magic with his new boards.

How much is he truly hurting? Will he still have the skills/confidence required to charge Chopes? He’s well-positioned to take advantage of the forecast conditions.

How much weight can you give one incomplete bomb? The proof for Filipe will be in the pulling (in) while wearing a contest rashie.

Wildcards are always outliers, but none more so than the ones who earn their spot at this contest. Bruno Santos went all the way in 2008, and has also made R5 and quarters since. Big name guys like Ian Walsh, Nathan Hedge and the late, great Ricardo dos Santos have all made a few rounds in the past and upset a few full-time tour surfers along the way.

This year will be event harder to pick, as both trials qualifiers are relative unknowns.

Can the Panda back up his Uluwatu success with another breakthrough result in left-hand reef waves?

This could basically apply to any surfer who is competing out here for the first time. The big difference is that Mikey could guarantee his qualification for 2019 with a decent result out here, regardless of whether he gets another wildcard spot in 2018.

While Chloe’s name doesn’t necessarily conjure up thoughts of heaving left-hand reefs, Kolohe has some chops in these conditions and his stats reflect this.

Have you signed up? We’re about to send a mail-out to all of our members with news on contests, dates and such. Saying that I’m psyched to be so close to sharing our hard work with you all is putting it mildly. If you haven’t already, check us out here.