France is always interesting to watch, but it has felt even more exciting since the pool event was added to the tour.

The Freshwater Pro undoubtedly has its flaws, but the WSL hardly help themselves by juxtaposing it against the Tahiti and France events. Tahiti, with its fear factor and raw power, makes the pool seem inconsequential and weak. France, with its dynamic and hyper-variable conditions, makes the pool look monotonous and fake. Maybe the Freshwater Pro was always destined to resemble those qualities anyway, but I feel like France is the real winner in the eyes of surf fans now that a pool is on tour.

France is also made even better this year because of the features we’ve added to our fantasy game, which add detail and community interaction to the game. See the details at the bottom of this page for more info.

The pounding beachbreaks of La Graviere have broken many boards and hearts alike. When they fire though, they can resemble the sorts of perfect beachbreak peaks that you scribbled on your schoolbooks as a grom. The WSL have done some great Break Breakdowns with Curren and Leo over the past few years, as well as Kelly’s take as a part of his ‘vision’ series.

For those who just want generalities, then this is what you need to know: conditions here vary greatly, with winds, swell and especially tides offering significant changeability during the course a day, let alone the entire contest. Add to that the fact that this is a ‘shared’ men’s/women’s event, and you can expect varied conditions and plenty of possible delays from one round of competition to the next.

Surfers with strong left/right and beach break data will be preferable. Gabe has had the place on dial, 2018 champ Julian has some good averages, and Ryan used his Merewether knowledge to make the final as a wildcard.

The official Surfline forecast has been updated, and it seems that there will be a few heats in the water from the outset:

John John Florence – arguably the greatest surfer in the world, John’s absence is a big loss. He will be replaced for the remainder of the season (except maybe Pipe, fingers crossed…) by Caio Ibelli.

Adriano de Souza – after re-tweaking his knee and missing the Freshwater Pro, AdS was briefly in the QuikPro draw, before announcing officially that he would not be surfing the remainder of the year. His replacement should be Ethan Ewing, but we will wait and see…

Mikey Wright – dealing with an ongoing back issue that has plagued him for around 18 months; we’re not exactly sure what his plan is for 2019.

*Warning* Joan Duru – while not officially out, Joan missed his round of 24 heat at Ericeira due to injury. He posted on social media that he’s “going to do everything to recover before France.” Watch this space.

Tyler Wright – Still no news on her return.

Ethan Ewing – despite a solid 5th at the EDP 10,000 this week, and despite being the next official replacement surfer for AdS, Ethan continues to see no love from the WSL.

Filipe Toledo – while he was never OUT, it is worth noting that Flippy tweaked his back in the pool, and is definitely less than 100% if the word from the grapevine is to be believed.

Leonardo Fioravanti – is back in the draw after rehabilitating his dislocated shoulder. His insta feed suggests that it’s not 100% though, so be cautious.

Caio Ibelli – will be replacing John John for the remainder of the season.

Frederico Morais – missed the pool event in order to win the Azores Pro (good call), and will now re-claim his replacement spot on tour in place of Mikey Wright.

Jorgann Couzinet – the ‘QS #7 was always a likely addition for his local event, and will be looking to make amends for his 25th at this event in 2018 and 33rd at the Corona Open J-Bay. His data is already available in the sortable tables below.

Marc Lacomare – a mere 100 places down the QS rankings from his countryman Jorgann, Marc may seem like a long shot. That is, however, until you look at his 2017 QuikPro event, where he finished in a very respectable 5th place (beating Julian, Jordy, Kanoa, Caio and Seabass along the way). To be fair, he has also copped a 25th in the 2011 and 2013 events, as well as a 25th in the 2011 Goldy event.

Marco Mignot – the young Frenchman has been mostly competing in junior events until this year, where he has tasted modest QS success and currently sits at 110th. This will be his first WCT event.

Vahine Fierro – mademoiselle Fierro had a solid start to her WCT career with a 9th place at the 2018 Roxy event, beating rookie sensation Caroline Marks in R2. She currently sits at 17th on the QS, and is knocking on the door of earning her own rookie CT season in 2020 if she can build some momentum heading towards the final qualifying events.

The women’s draw is here:

Also, If you don’t want to wade through the confusion of seeding, brackets and tiers, but want to play around with possible match-ups in future rounds, then check out fantasy surf bracket. It’s not always updated for each event, but you can customise it to match the QuikPro draw.

As well as the win % and average place metrics in the below table, all surfers have career and season results / AHS / win % data available on their profiles at fantasysurfsessions.com, why not pick a team while you’re there?

Gabriel Medina – much like the pool, Gabe is the numbers’ favourite. 3x winner, best event win %, average place, and AHS. Tops all metrics for beach breaks, L/R waves and 4-6′ conditions.

Jordy Smith – Jordy ranked 2nd in our summative ranking metric for this event. While he doesn’t top any of the relevant fields, he is top-5 for most, and is especially strong in L/R, beach break and 1-4′ conditions.

Ryan Callinan – I’ve been burnt a few times by Rhino lately, but his numbers for this particular event are reasonably strong; in his two appearances at this event, he’s 2nd to Gabe in event average place and AHS, and 3rd behind Julian for event win %. He also has a solid AHS in beach breaks.

Sebastian Zietz – while it would be easy to recommend Julian here (and he’s a worthy pick, to be fair), it’s impossible to stack your team with all of the top seeds. While Seabass’ QuikProFrance fortunes started with a 13th, 13th, and 25th over the first 3 tries, he has since turned his form around with a 9th, 2nd, and 5th on the trot. Couple that with his extraordinary ability to sniff out a tube, and the 3-thumbed stoke-machine starts looking like a value option.

Filipe Toledo – picking an injured Filipe is just too much risk in an otherwise loaded top-tier.

Leonardo Fioravanti – he’s not 100%, he hasn’t a great record at this event (despite knowing the break well), and his averages across most relevant fields are poor. I’d be giving Leo a miss here.

Jack Freestone – like Leo above, Jack’s data in the relevant fields – as well as this event specifically – suggest he will be fighting history here. I was particularly surprised at his low win % in L/R and beach breaks, given his best result has been a final in Rio.

Kanoa Igarashi – has only won a single heat at this event in his 3 years on tour. His other metrics suggest that he’s certainly not the lowest-percentage pick for this event, but he’s the most risky of the top seeds.

Here’s the thing about data-driven fantasy selections: they almost always guarantee you a safe, bankable score. What they don’t earn you is a winning score, a score that takes risks with an against-the odds darkhorse-come-good. For that, you need to back yourself with a solid sleeper pick. Here are my non-data-based suggestions:

Jordy Smith is quite the sleeper this year. At 3rd place, with a 75% quarters-or-better rate, he’s easily the most solid option who’s barely being spoken about.

At 22nd, Yago Dora has only just pulled himself back into the qualification frame after a big event in the pool. He’s ripping up the Ericeira 10,000 QS event as I type (he finished 2nd), and looking like he wants to be on your fantasy team…

Speaking of QS results, Frederico has been looking in fine form after taking out the Azores 6000 and cruising through the first few days of the Ericeira event (edit: he just finished 9th). Can he convert this QS form to the CT?

Fantasy Surf Sessions can finally announce that it’s next suite of upgrades, which include player clubhouses, clubhouse chat, and the ability to view other players’ teams, is now live on the site. It’s easily the most exciting set of changes we’ve made since our initial launch, and we strongly encourage you sus’ things out before lockout. For example:

Here is our new Team Comparison feature, mapping my Freshwater team against that of the event winner Micah. Shaded surfers are shared by both players, while highlighted ones represent a point of difference: 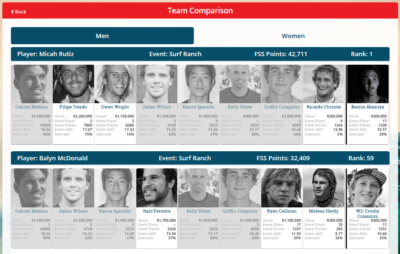 And here is the new Club menu tab, with the official Surf Stats clubhouse on full display:

Make sure you log in and set your team so that you’re in the running for our event prizes (yep; every single event).

,
See all articles
Go to Top