Sorry it’s late; I’ve been killing myself trying to get our fantasy game ready for France (see bottom).

The France-into-Portugal leg is always a quick turn-around, with massive world title and qualification narratives woven between high-tide holds and lay-days. It’s the business end of the season, so you better get those fantasy teams lit:

That’s what everyone seems to be saying.

The pounding beachbreaks of La Graviere have broken many boards and hearts alike. When they fire though, they can resemble the sorts of perfect peaks that you scribbled on your schoolbooks as a grom. The WSL have done some great Break Breakdowns with Curren and Leo over the past few years, as well as Kelly’s recent take as a part of his ‘vision’ series. There’s plenty of detailed information out there for those who want to analyse the tits off it. For those who just dig generalities, then this is what you need to know: conditions here vary greatly, with winds, swell and tide all offering significant changeability during the course of the contest. Add to that the fact that this is a ‘shared’ mens/womens event, and you can expect varied conditions and plenty of possible delays from one round of competition to the next.

Normally, the surfers who succeed here can adapt well and surf a range of conditions. Use our sortable data and check the forecast (which is yet to be updated by the WSL) to make sure you’re selecting a well-suited team.

Tyler Wright – we joked last event that Tyler’s injury was dubious, but now we’re genuinely concerned. It’s crazy to think that a ‘flu virus, no matter how severe, could derail a defending world champion for months. Tyler virtually surfed in a moon boot at the end of last season, so we know she’s tough.

Silvana Lima – Silvana recently went under the knife, and will be out to recover.

John John Florence –  John won’t be in a competition singlet until Pipe at the earliest.

Caio Ibelli – He’s in the water and surfing, but has confirmed he won’t be competing in Europe.

Kelly Slater – The G.O.A.T is still using his hoof as the foundation for his injury hokey pokey with the WSL. Like John and Caio, he’s not worth looking at until the Pipe draw is confirmed.

Mikey Wright – I’m not sure what the WSL are playing at lately, but Mikey’s been added to the event draw at the 11th hour for the past two events, despite there being a very obvious TBC exactly where his seeding would have him placed. Are they worried about the ‘preferential treatment’ push-back? Weird. Anyway, he’s in. He’ll be surfing Portugal too by the looks.

Miggy Pupo – Miggy stepped up to make the finals at the Ranch, and doesn’t mind the conditions here at France either. Could he be a smoky for a late qualification tilt? Probably not.

Wiggolly Dantas – Wiggs is in. Again. But nobody will pick him. Again.

Ryan Callinan – Rhino defeated Gabriel Medina in the semis, then Kanoa Igarashi in the final to win the QS 10000 event at Ericeira. The Novacastrian’s victory earned him a spot in the QuikPro event, as well as an assured place on tour in 2019. Those that know Ryan, his talent and the adversities he’s been through recently all agree that this is one of the best stories in surfing this year.

Jorgann Couzinet – The French native has been knocking on the qualification door for a couple of years now, and looks close to locking in a place for 2019 if he can win a few heats in Hawaii. He’ll get his first taste of CT competition here this week.

Vahine Fierro – This fairly unknown surfer from the PYF island of Huahine will make her WCT debut as a wildcard (she’s ranked 44th on the 2018 QS and finished 28th on the QS in 2017) .

Macy Callaghan – Macy is again replacing Tyler, but she’s having a poor time converting her opportunities.

It looks like our DIY version was wrong. I’m not sure how the seeding changed, but the updated draw is below:

The women’s draw has been up for a few days, and includes Macy Callaghan and the young, goofy-footed Tahitian Vahine Fierro:

We’ve got all of the relevant surfers’ results from the past 14 years at this event, including Wiggolly, Miggy, and Ryan Callinan:

Five-and-a-half seasons of data crunched into a sortable table. Choose what you think is relevant, and go nuts.

Gabriel Medina – Medina presents the perfect trifecta coming into this event: he has an incredible history of success here, with 5 finals and 3 wins in just 7 appearances, and 2x 5th places as his worst results; he tops our list for metrics and projections using historical data, and; he’s in red-hot form.

Kolohe Andino – Chloe has a good results history in France, plus his metrics aren’t too bad. His seeding is fairly good as well, so there won’t be too many big-name clashes early in the event.

Jordy Smith – Surprisingly, Jordy averages 2nd in 1-4′ AHS, as well as 3rd in beachies and left/right peaks. The big man could do well here in the small stuff.

Filipe Toledo – if the forecast is to be believed, then Filipe’s stock rises considerably. Filipe’s metrics in 1-4′ waves are enough for me to overlook his 13th-place average and only OK averages in beachies.

Ian Gouveia – Ian would seem well-suited to the small, punchy peaks of La Grav, but his AHS for this event from last year is a measly 5.24 (based on only 2 heats, admittedly).

Ryan Callinan – Rhino did OK at this event in 2016, with a narrow 13th place loss to Medina in the highest scoring heat of the round. His averages across the 2016 season in 1-4′ surf leave a lot to be desired though.

Kanoa Igarashi – The kid’s on fire. His Sharp Eye boards look amazing and he’s making finals in his sleep. He’s had a 3rd at J-Bay and the Ranch, as well as two finals in QS 10000 events.

Gabriel Medina – They guy is coming off consecutive CT wins. It’s going to be very interesting to watch him chase down Filipe as the season draws to a close.

Owen Wright – Owen’s 2nd at Tahiti, followed by a 5th at the pool have put him in a good head space. Dark horse?

Matt Wilkinson – it’s not just the CT; Wilko’s 4 consecutive 25ths were compounded last week with a 37th at the EDP in Portugal.

Keanu Asing – The ‘nu may be a past champion here in France, but he hasn’t made it past R3 this season, and is coming off the back of 3 consecutive 25ths.

Wiggolly Dantas – Had the honour of finishing dead last at the Surf Ranch.

High End – Gabe and someone will be on your team. Will you go safe with Filipe? Or maybe stick with consistency in Kolohe? Our dark horse pick here is Jordy; he’s surprisingly strong in the small stuff, and he’ll be selected by fewer teams.

Mid Range – It’s hard to know what will be a sleeper in this group, but I’m sticking with Connor O for one last roll of the dice.

Low – Ryan Callinan is a risk, but wildcards are usually lowly represented when added to the draw late, and he’s a massive passion pick for me. Lock him in!

Rhino – Ryan has a 13th in his one competition here, and managed a decent AHS in his 3 heats. He’s looking good for form, but he’ll need to come out swinging.

Julian Wilson – can anyone predict which Julian will turn up at each event? It looks like this season is slipping away from Jules…

Jorgann Couzinet – Looked promising at the QS 10000 event last week, and will be well suited to the conditions if he can overcome his poor seeding.

Julian Wilson – Could he be less predictable if he tried? Good luck if you have the self-belief to back him.

Miggy – Pupo had plodded along listlessly so far this season, until the Ranch event brought him to life. He has a reasonably respectable history here in France, and could be worth a pick if he can avoid that early-season form.

Have you signed up? Teams will be available to select in the next 24 hours. 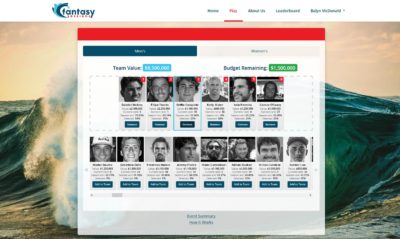 Sign up now, get picking, and then tell us why it sucks so that we can get better!