Is this a proper preview? Hell no; everybody’s teams are already locked in.

This is more of a basic overview from a stats persepctive, and maybe some insights for those who don’t mind a little bit of casual betting here and there. Join us while we join the dots on this Frankenstein’s Monster of a contest. For those unsure, here’s a reminder of why we’re here and what we are doing.

If you picked a team for the Margaret River contest in either the Fantasy Surfer or WSL game, then you’re all set; the only thing left to do is sit back, lament the loss of John John, and hope that the remainder of your team can go left despite being selected for rights.

If you didn’t pick a team for Margies, then we’ll be dropping our J-Bay stats in a few weeks.

Uluwatu is a world-class, left-hand reef break on the Bukit peninsula in Bali’s south. What was once a remote nirvana for 1970s hippies and explorers alike has now ‘progressed’ into a popular resort destination for surfers of all levels. The break itself consists of several sections, each with its own name and characteristics (detailed here), but a majority of the contest will be run either at The Peak, Racetracks or Temples, depending on the tide.

Firstly, there’s only been one CT event at Uluwatu, that being the Rip Curl Search in 2008. Of the surfers who were there ten years ago, only four have made R3 in this year’s contest:

Update: The newly named Uluwatu Pro has been scheduled for the 8-11th of June (local time). The forecast is still set for 4-6′ waves with favourable winds.  The WSL/Surfline forecast is here.

Below is our table of  relevant conditions averages for the Uluwatu contest. We have only included surfers still in the draw.

Italo Ferreira – is fresh off his win at Keramas and looked full of confidence. Even the WSL are talking up his chances. He’s a genuine threat to go deep in the title race at the end of the season, but his ability to do well in left-hand reefs will be key to his success.

Filipe Toledo – has a better ‘average’ placing for the season than Italo, with only one guaranteed throw-away result from the four completed events (Italo has 2). Filipe more than anyone needs to ensure that his left-hand-reef-break surfing is ready for Ulus.

Mikey Wright – ranked 12th for the season with only 3 full results (no Bells). He’s guaranteed a 9th place or better for the event, with another decent result furthering his opportunity to cement his place on tour next year.

John John – Ross can say what he likes, John can shrug and mumble excuses, but at the end of the day, John’s 2018 is worrying. He’s not sucking completely, but he’s certainly not frothing like some of his peers.

Update: John John has withdrawn from the contest owing to a knee injury. His exact recovery time is unknown at this stage, but there are murmurings that he could miss more than just this event.

Joel Parkinson – My, oh my. Parko looks pedestrian this season. He hasn’t made it past R3 so far this year, is ranked 28th, and looks closer to retirement than I’ve ever seen. It’s a pity it will be with a whimper, rather than a bang.

Connor O’Leary – The 2017 ROTY announced his arrival on tour with a runner-up result at Fiji last year, so he’s a massive Sleeper for this event. Unfortunately for Connor, he’s currently sitting at 33rd in the world and struggling with only 2 heat wins for the season. This venue move could see a chance for him to slay his sophomore dragons, if he can stop the rot.

It’s straight into man-on-man eliminations for the men from this point. 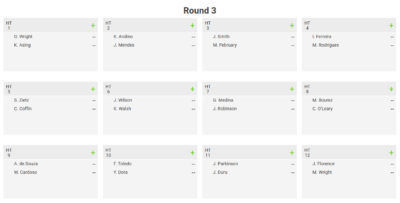 The women completed R3 at Margaret River (while shark attacks were happening a few kms north) and will resume from the sudden-death QF round. All top 5 surfers on the women’s tour are still in the event, but Steph will have a tough battle against a down-on-form-but-perfectly-suited-to-the-conditions Bronte Macaulay, while Lakey will face up against her fellow Bali Pro finalist Tyler:

After a surprisingly strong Rio event, followed by a cracking few days at Keramas, the tour is buzzing. Uluwatu should hopefully build on that, while simultaneously giving us some insights into where the tour is headed at the end of the season.