So, here we are: between European legs, and things are tight. A tight turn-around, a tight title race, and tight fantasy contests.

How good was Rhino? How sweet is it to have a proper title race?

With the short turn-around between events, this preview will be a little brief, but the stats will still be there in full.

While Portugal isn’t as fiercely changeable as France, surfers will still need to adapt to variable wind, tide and swell conditions, so recent success in France could be a consideration. Being a certified barrel-hound won’t hurt either. Use our sortable data, check the forecast updates and choose the stats that you think are important.

Surfline have an ultra-detailed Mechanics of Supertubos article available for those who want to re-familiarise themselves with the break details and learn the meaning of bathymetry. The WSL have a Break Breakdowns with local Tiago Pires  with plenty of stuff there for train-spotters. Kelly gave us another Visions overview as well. The 2016 guide is pretty handy too, giving us this neat summary:

The official forecast calls for:

a series of WNW and NW swells through much of the upcoming week with northerly winds looking likely. Additional NW swell pulses are expected for next weekend and again early the following week. A slower pattern looks to emerge after that, likely lasting through the end of next week.

What’s all of that mean? The swell looks promising, with decent forecasts across the week, but the winds could be a little onshore or cross-shore until the weekend. Keep an eye on things, but be mindful of potential air winds, and don’t bank on a team small-wave specialists.

John John Florence –  John won’t be in a competition singlet until Pipe at the earliest.

Caio Ibelli – He’s in the water and surfing, but had already confirmed he won’t be competing in Europe.

Kelly Slater – Kelly’s place at Pipe is still unknown, but he was never surfing Europe.

Mikey Wright – Mikey’s 5th place in France guaranteed his qualification for 2019, so I guess the WSL figure he can have a rest.

Joel Parkinson – Parko was phoning it in anyway, he may as well wait for a proper send-off at Pipe.

Vasco Ribeiro – The Portuguese native has a respectable history of upsets here as a wildcard, and will be a welcome addition in place of Parko.

Ryan Callinan – He killed it in France, he’s qualified for 2019 already, and now Rhino seems to have taken the WSL’s new role as Australian-QS-surfer-with-wildcard-benefits over Mikey Wright for Kelly’s spot.

Miggy Pupo / Wiggolly Dantas – both surfers will again replace Caio Ibelli and John John, possibly for the last time in 2018.

Miguel Blanco – Miguel was a local wildcard in this event once before back in 2016, but was knocked out early with a 25th.

Samuel Pupo – Rip Curl have handed Miggy’s little brother his 2nd wildcard spot, after an unsuccessful stint at Bells in 2017.

It’s interesting to note that, after his 2nd in France, Ryan Callinan is seeded 31st, above Asing, Dantas & the other wildcards. 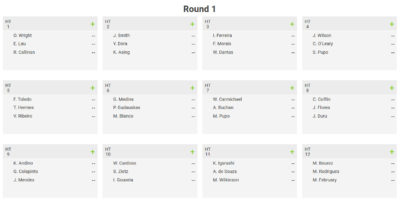 Medina – He’s on fire as far as form goes, he’s the statistical favourite, and he’s now the title leader.

Ryan – Rhino has the best AHS in beachbreaks across all surfers. He’s also running on red-hot form.

Filipe – Sure, he failed fantasy teams everywhere with his QuikPro result, but he has solid metrics across the board for this event, and he still leads the field with the highest AHS for the season.

Adrian Buchan – Ace has a terrible AHS and average place result for this event. I’m not sure why, but he sticks here.

Italo Ferreira – Italo’s coming off the back of two 13ths in a row, making it 5x R3 losses for the season (and a 25th). He looked like a contender at one stage, but now he’s fading.

Michael February – his metrics aren’t great, he’s coming off the back of two 25ths, and he’s outside the qualification bubble. Tough times.

High End – I called Jordy last event, and he outshone a fair few top tier surfers. I’m going to double down on Jordy as a sleeper again in Portugal, since all the hype is on Gabe/Filipe/Julian.

Mid Range – Michael Rodrigues is still in the mix for ROTY against Wade, Willian and Griff, and could surprise again here.

Low – You could go with Vasco or Ryan, but I’d say a few people will pick Ryan due to his form. Vasco is the more contrary sleeper option.

Wildcards – Miguel and Samuel are young, talented and have nothing to lose. They also have terrible seeds and little experience. Pick with care.

Vasco and Ryan – Completely different wildcards to those named above; Vasco has runs on the board at this event, and Rhino’s in red-hot form. Can they back it up?

Julian Wilson – When Julian’s on, he’s unstoppable; cool-headed, talented, hungry. When he’s off, he’s as disappointing as a Star Wars prequel.

He didn’t even bother showing up, so please don’t pick him.

Filipe Toledo – is he looking fragile now that the title is getting close? Can he step up and bounce back from France?

Massive congratulations go out to Shane Helm, who took out the inaugural FSS fantasy event with a QuikPro France score of 805 (out of a possible 1043). Shane had Wilson, Callinan, Medina, de Souza, Wilkinson, Parkinson, Toledo and Buchan. For his efforts, Shane scores a specialised set of 3DFins from our friends at https://www.surefireboards.com/

A set of fins are also going out to Terry, as the winner of our ‘lucky door prize’ for ranking 17th, the number that matched the jersey of Julian Wilson, the event winner.

Two fin-set prizes will again be offered for our Portugal fantasy event, so make sure you register a team before lock-out.

We’ve already made a few adjustments to the game based on your feedback, and would welcome any suggestions players are willing to make by contacting us here. So, sign up now, get picking, win some stuff and then tell us why we suck so that we can get better!

It should be noted that, for the time being at least, surfer values will be recalibrated for each new event and teams may be reset during this time. There will be no equity for selected surfers who have risen in value. If you selected your team early, before the draw was released, then please log back in and check to see if changes are needed.

It’s also worth noting that the perfect team was NOT possible for France, with the top 8 placed surfers valued at $11.75M. 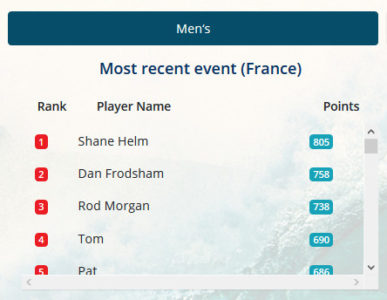 That’s it for now. Good luck!