While Pipe may be the ‘Superbowl of surfing’, Portugal certainly punches above its weight when it comes to world title speculation. Throw in the race for Olympic qualifications and a decent forecast, and we have plenty to get psyched about for Portugal.

Medina, Seabass, Filipe, and Jordy et al. may have ensured that most fantasy teams sucked in France, but the pain will be short-lived. While the tight European turn-around may offer few hours of sleep for me, for everyone else it spells a quick shot at redemption.

While Portugal isn’t as fiercely changeable as France, surfers will still need to adapt to changes in wind, tide, swell, and possibly venue conditions across the event. It’s no surprise that any recent success in the tubing beachbreaks of France will be a consideration for fantasy players, especially at the place known affectionately as Supertubos.

If you dig on those deeper analyses of each break, Surfline have an ultra-detailed Mechanics of Supertubos article available, while the WSL have a good Break Breakdowns with Tiago Pires  and Kelly gives us another one of his visions overviews as well.

For those who just like to jog their memory or run their eyes over a paragraph summary, the 2016 WSL guide gives us this:

Remember also that the event is semi-mobile, with back-up venues such as Pico do Fabril, Pico da Mota and Piscinas available if needed.

Another important change is that, unlike recent years, Portugal IS a combined men’s/women’s event in 2019 (the first time since way back in 2010), meaning there will be a little to-and-fro between hold/run days/rounds over the course of the waiting period.

The official forecast is already up, and it looks like there will be plenty of swell combined with some variable winds. There are some favourable run days towards the back end of the waiting period as well, so this contest could be a bit of an on/off affair. Here’s the latest summary:

John John Florence – arguably the greatest surfer in the world, John’s absence is a big loss. He will be replaced for the remainder of the season by Caio Ibelli (except maybe Pipe if he returns to keep his Olympic spot, fingers crossed…).

Adriano de Souza – after re-tweaking his knee and missing the Freshwater Pro, AdS was briefly in the QuikPro draw, before announcing officially that he would not be surfing the remainder of the year. His replacement should be Ethan Ewing, but we will wait and see…

Mikey Wright – dealing with an ongoing back issue that has plagued him for around 18 months; we’re not exactly sure what his plan is for 2019.

Tyler Wright – Still no news on her return to competition, however she seems to have gotten back into the water, which is great news.

Ethan Ewing – is the WSL’s bitch yet again.

*Warning* Filipe Toledo – while he won a heat in France, Filipe was obviously nursing his injured back. How he’s recovered over the ensuing 8 days is anybody’s guess.

*Warning* Italo Ferreira – Italo surfed his last 65 mins of the contest in France with a leg/foot injury. He still surfed well, and seemed just as committed to massive air attempts, but did look a little ginger when back on land. He is very likely to compete in Portugal.

*Warning* Kolohe Andino – Kolohe actually did better in France than other top 5 surfers such as Filipe, Jordy and Medina, but he readily admitted in his post-heat presser that his back is limiting his confidence and stamina. He is flying a specialist over from California this week, so it will be interesting to see how he surfs.

Leonardo Fioravanti – is back baby. Despite selling us a red herring with an apparent injury concern before the QuikPro, Leo turned things around to not only surf fine, but also produce one of the best results of his career.

Caio Ibelli – will be replacing John John for the remainder of the season.

Alana Blanchard – the soft-porn Instagram star, Rip Curl shredder and mother of the 2038 world champion gets the wildcard spot.

Miguel Blanco – the young Portuguese QS grinder will surf in his 3rd MEO event, with a 0% win in his first 2 events.

This is the current men’s draw, but it is missing wildcards and a replacement surfer. Hopefully they will update soon:

Alana has been added to the women’s draw, with R1 looking thus:

Also, If you don’t want to wade through the confusion of seeding, brackets and tiers, but want to play around with possible match-ups in future rounds, then check out fantasy surf bracket. It’s not always updated for each event, but you can customise it to match the draw.

Gabriel Medina – may have slipped below expectations in France for his worst result at the event, but he’s still the favourite for this event according to the data.

Italo Ferreira – the reigning champ has a good record here (two finals), as well as undeniable form coming out of France.

Jordy Smith – killed me last event with his poor R3 effort, but has some decent stats for this event, including 2 finals, a semi and two quarters over the years. One of the few top seeds who doesn’t appear to be injured.

Jeremy Flores – in case you missed it; Flores can ride barrels. He’s like a tube-whisperer. No, he’s more like some kind of barrel-slut, with all the round and willing waves invariably seeking him out and letting him slide his way inside of them like a well-oiled Frenchman. Ahem. Where was I? Oh, yes; form. Jeremy is the form surfer going into event 10.

Filipe Toledo – we warned you about his injury before France and were vindicated. I’d steer clear again.

Kolohe Andino – remember that time when Chloe was world #1 and JJF had just been ruled out for the rest of the year, thus giving Brother the best possible scenario in which to achieve an elusive world title and finally live up to his lofty potential? You do! Man, they were the good old days…

Jadson Andre – in his 7 appearances at Peniche, he has been winless 4 times and only made it past R3 once.

Ricardo Christie – finally broke his run of 17ths in France, only it was with a 33rd. Ricardo is looking short on form.

Miguel Blanco – is 0 from 4 in his heats at this event. Not the best track record.

Here are my purely subjective suggestions from the low percentage surfers among the WSL R1 fan picks:

With Flippy and Chloe nursing injuries, and Gabe still too hot to call a sleeper, we delved into the remaining options and found that only 59% of players (at time of publishing) think Flores can win his R1 heat. Why not take a punt?

Yago Dora has only 7% of selections for R1, which is somewhat skewed by the fact that he’s in Italo’s heat, but still representative of a possible hidden gem.

Yes, Soli Bailey is still on tour. Sure he’s been quiet, but don’t let that fool you; he’s a silent threat that is ready to do damage here in Portugal. Or maybe at Pipe next event. One of them for sure*.

*This in no way represents any guarantee from me whatsoever.

Sure, we mentioned it before, but I’m proud as hell so I’m saying it again…

Fantasy Surf Sessions is stoked to announce that it’s next suite of upgrades, which include player clubhouses, clubhouse chat, and the ability to view other players’ teams, is now live on the site. It’s easily the most exciting set of changes we’ve made since our initial launch, and we strongly encourage you sus’ things out before lockout. For example:

You can use our new Team Comparison feature, mapping your France team against that of the event winner Jaris2230. Shaded surfers are shared by both players, while highlighted ones represent a point of difference 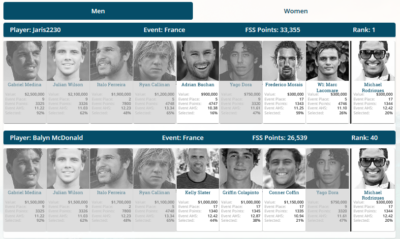 Check out Rocky’s team, which won him a prize for getting 97th place at the QuikPro FRance (due to our ‘lucky door’ award for matching the event winner’s jersey):

You can click on the new Club menu tab, join the official Surf Stats clubhouse, or start your own and challenge your friends.

Make sure you log in and set your team quickly so that you’re in the running for our event prizes (yep; every single event).