Hawaii has already served up some hefty drama this week, what with Tyler’s stunning comeback, Steph’s 5th Honolua win, Carissa’s 4th title, and Lakey’s fall at the final hurdle, it was a massive end to the women’s season.

Not to be outdone, Sunset brought the men’s QS picture into focus with some quality conditions on the final day. When the dust settled, everyone’s hopes (except Zeke’s) were realised when Jack Robinson won the event and qualified for the 2020 big league.

Not a bad start to the winter season.

Now we turn to Pipe; the liquid beast that patiently waits to crown kings and devour careers at season’s end. There’s no event more important, more anticipated or more entertaining to watch.

It’s worth noting that I ran the numbers on all five world title hopefuls in an article for BeachGrit a few weeks ago. It had a much more detailed analysis of certain metrics including CAREER Pipe stats rather than just data from my 2013-2019 spreadsheets. If you want to get the title race insights and delve deeper into the data, click here. Similarly, there are some deeper stats on some of the Australian and US surfers in my Olympics article.

Pipe has so much rich history and respect that I feel that, as a mediocre Australian surfer who’s never visited,  I’m probably not the most qualified to write about it. Instead, I’ll leave it to surfing’s most respected historian; Matt Warshaw’s excellent encyclopaedia of surfing (subscribe here) describes it thus:

Beautiful but ferocious Hawaiian surf break located on the North Shore of Oahu, regarded since the early 1960s as the sport’s premier tube; site of the venerable Pipeline Masters competition. “First it intimidates you,” Kelly Slater said. “Then you find the balls to give it a try. Then you figure it out, and grow from the pride that comes with that. Then you get hungry for it.”

Pipeline is best on a west or northwest swell, and like with the rest of the North Shore breaks most often from October to March. While “Pipeline” specifically refers to the left-breaking wave, it can also be used to include Backdoor, the right-breaking wave attached to the Pipeline peak that opens up when the swell comes in from the north or northwest; surfers will often take off side by side, one riding Pipeline, the other riding the Backdoor right.

Over the last few years, Pipe has switched from a goofy-footer’s wave, to one mostly dominated by those with the left foot forward, partially because the left is more forgiving on your backhand than the fast-running right. That generalisation was shaken a little by Gabe last year though, when he rode Backdoor on his backside like a man possessed.

There are numerous guides to Pipeline, including surfline’s mechanics of pipleine, the WSL’s breakdown with Gerry Lopes, and a new Vision piece with Gabe. Then there’s GoPro guides from Kelly, John and Seabass.

Our metrics focus on reef breaks, in both left and right conditions, with a weighting towards results in this particular event and for an average of slightly larger waves (4′-8′) based on recent history.

The official forecast is up, with the start of the week looking promising, before maxing out by Thursday. Another good swell looks to be building for the end of the event window.

We are all set to start on Tuesday (Hawaii time) and could possibly have everything wrapped by Friday.

Adriano de Souza – after re-tweaking his knee and missing the Freshwater Pro, AdS announced officially that he would not be surfing the remainder of the year.

Mikey Wright – dealing with an ongoing back issue that has plagued him for around 18 months; we’re not exactly sure what his plan is for 2020, but Pipe is definitely out.

Warning – Jordy is feeling a little ginger after hurting his ribs. He’ll still compete, but won’t quite be 100% by the looks.

John John Florence – the Prince of Pipeline is returning from knee injury to surf his home break for a chance to claim an Olympic berth representing the USA. Not a bad cameo for the 2x world champ.

Caio Ibelli – will successfully qualify for 2020 based on 11 consecutive injury replacements. Will be replacing Adriano for Pipe.

Frederico Morais – the Hawaiian Pro winner and current Triple Crown #2 is back on tour and looking to flex before resuming full time duties in 2020. Replaces Mikey at this event.

Billy Kemper – the big wave maestro returns to Pipe after a R3 showing in 2012. Despite being better known for his Pe’ahi heroics, Billy has spent many hours at Pipe and will be a formidable wildcard. He draws Italo Ferreira and Michael Rodrigues in R1.

Imaikalani deVault – the stylish 22 year old from Maui held his own at (mostly) backdoor, and finished runner-up to Kemper. He gets a higher seeding (35th) to Kemper in the Pipe draw due to his better QS ranking. He has drawn Gabriel Medina, which will be tough, but also has Cardoso in this SR heat, meaning that at least a 17th could be on the cards. Check his Surfer Mag edit here.

Ethan Ewing??? – No; his 5th at the Pipeline Invitational was not enough.

This is the completed draw:

Also, If you don’t want to wade through the confusion of seeding, brackets and tiers, but want to play around with possible match-ups in future rounds, then check out fantasy surf bracket. It’s not always updated for each event, but you can customise it to match the draw.

All tour surfers are included, plus a few trials surfers with relevant data. There is data for lefts, rights and events offering both. This is to show you the difference in scoring potential for each surfer at Pipe vs. Backdoor.
Note also that, for formatting purposes, the table scrolls horizontally as well as vertically.

John John Florence – we’re completely aware that John is untested in a contest jersey since his surgery. We’re also aware that he’s never actually won Pipe, but this is a fantasy surfing preview, and John offers the best value for fantasy dollar in the market for Pipe. He tops the average place and AHS for the event, is top 3 for event win %, reef win %, and win % in any surf above 4′.

Gabriel Medina – there are only so many top-tier surfers you can fit into your team. For Pipe, Gabe should be the one you spend money on. He’s the reigning champ, with a truly phenomenal performance in 2018 to almost redefine how goofy footers can surf Backdoor. His stats are all great, including the event win %, AHS and average place. Sure, your heart may say Italo, or Jordy, but the cold, hard numbers are pointing to Gabe. Your heart’s a fool; go with your head.

Kelly Slater – you know, the most successful Pipe surfer of all time, the guy who surfed here 26 times, won 7, and still holds a 70% win rate. Even if you look at the data from the past 6 years, he’s in the upper echelon of surfers at this venue and for these conditions.

Joan Duru – yeah, yeah; I know. Flores, Julian, Kanoa, Michel etc. probably deserve your team spots more than Joan, but I can’t recommend only top-to-mid tier surfers. It’s essential to trawl the data and throw in a cheapy. Joan got a 5th here in quality waves last year to earn himself a requalification place. That’s a result under pressure. His data isn’t too bad for just 2 events (25th and 5th), with his AHS the big factor that pushes him above the pack (7 heats at 10.83, which is higher than Julian, Kanoa and Michel).

Owen Wright – I know, Wright? How could I besmirch the Gath lord himself? Well, it’s not you, Owen, it’s your data. He has only made the quarters once in 6 Pipe events, for a win rate of 27% and an AHS of 9.36. Owen has a formidable record at Fiji and Tahiti, but his Pipe data is pretty poor.

Willian Cardoso – Maybe it’s because of his efforts at Tahiti this year, but I immediately looked at Willian when making this list. I wasn’t surprised to find that he’s winless from 1 event, with an AHS of 3.34. That’s his best TWO waves across TWO heats averaged. He has low AHS data from 6’+ waves as well.

Kanoa Igarashi – has a low % of fan picks of all top-seeds in R1. While he has a tough R1 heat, his Pipe numbers reflect a surfer with a decent chance of making heats at this event.

Jack Freestone opened a few eyes with his performance at Tahiti this year, and he’s on a burner as far as his Europe form goes. Can he continue? Methinks yes. That’s despite a rubbish Pipe history. As far as data goes, Jack is a complete sleeper.

Come on Soli Bailey, don’t screw me over again. He’s won at the Volcom Pro at this very venue, so if he’s ever going to make some heats in his rookie year, now’s the time.

Sure, we mentioned it before, but I’m proud as hell so I’m saying it again…

Fantasy Surf Sessions is stoked to announce that it’s next suite of upgrades, which include player clubhouses, clubhouse chat, and the ability to view other players’ teams, is now live on the site. It’s easily the most exciting set of changes we’ve made since our initial launch, and we strongly encourage you sus’ things out before lockout. For example:

You can use our new Team Comparison feature, mapping your team against that of the event winner (RydrHi vs. my son’s for Portugal). The shaded surfers are the ones shared by both players, while unshaded ones represent a point of difference. This feature is available immediately after lockout. 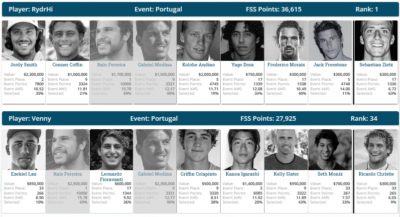 You can also click on the new Club menu tab, join the official Surf Stats clubhouse, or start your own and challenge your friends.

We are already underway for our next round of gameplay tweaks for 2020, including surfer comparisons over specific data areas. Nerdy!

Make sure you log in and set your team so that you’re in the running for our Pipe event prizes (yep; every single event).