The Oakley Pro at Keramas was debuted on tour in 2013. We’d seen video footage and heard plenty of stories, but nobody really knew what to expect. It was like a search event, and most were psyched. Once it started, the waves and surfing both fired, and surf fans seemed stoked with the tour’s new addition. Except, that was it. Parko looked like being the first and last winner of a CT event at Keramas due to funding, or insurance or something (it certainly wasn’t the waves or event’s success). In 2014 we saw the Margaret River Pro join the CT, and the Keramas event became a QS 1000 that Taj Burrow dominated.

Then, in 2018, it all came full circle. The Margaret River Pro was cancelled, with many questioning it’s future on tour. When the continuation of the remaining rounds was confirmed, we were told that Uluwatu would host the remainder of Event 3. Meanwhile, just around the corner, the Keramas event had been reborn as the Carona Pro, essentially taking the place of the Fiji event after Rio. In a subtle twist of irony, Margaret River was losing it’s place on tour, while Indonesia had swelled to 1.5 events.

Nobody knows what the 2019 will look like, but the next two weeks will tell us a lot about the success of Indonesian events, as well as the 2018 title race and our fantasy teams. No pressure.

Keramas takes bits and pieces from several familiar waves on tour, but is unlike any of them as a whole. It can most easily be related to Trestles in that it’s a medium length ride, with high-performance opportunities. It’s a reef though. And it barrels much more often. And there’s no left. So it’s pretty different.

Kelly has been doing his ‘Vision’ series this year, where he gives fans a snapshot of an event or location via short quotes and clips. In his clip for Keramas, he used the term ‘high-performance’ about 4 times, so I guess we know to expect some progression. There are also ‘spot check’ videos/articles from Surfline (with Rizal), Red Bull (with Jordy) and Surfline again (with the WSL). Ben Mondy also gets all historical and important-sounding for the WSL here.

In short, Keramas handles swells from small to well-overhead (hence our inclusion of 1-4′, 4-6′ and 6-8′ wave data in our metrics page). It suits high performance surfers, and it favours regular-footers more than goofy. It can get heavy, and the reef has been known to take souvenirs. Finally, it often suffers from onshore winds, meaning that the ‘air winds’ could be a big opportunity for surfers with above-the-lip prowess.

When the event was last run in 2013, Parko and John John surfed what ended up being one of the heats of the year, with barrels and airs on tap. Hopefully we’ll get to see more of that in 2018. The forecast doesn’t look spectacular though, so don’t expect consistent perfection. Maybe they’ll run some heats at night if time is running out?

Let’s look at the best picks for the conditions…

The Bali-Pro-into-Uluwatu leg will be massive for John, but he’s got the stats to support a decent shot at redemption.

Joel may be on the downward slide into retirement, but he can beat anyone when he’s inspired by the waves. He is the only former winner of this event, with a title in 2013. He also ranks 2nd for AHS in rights, 4th in his AHS for this event, 6th in reefs & 4-6′ waves, and top-10 for 1-4′ and 6-8′ heights. He also inspires some hope with this quote, “I’d been coming to Bali since I was 12 years old and surfing Keramas for a decade. It’s a part of the world that I’m most happy and relaxed in. That’s how I won the Oakley Pro in 2013. I just enjoyed myself and the wave. It’s almost impossible not to.” The only thing is: do we want Parko to be any more relaxed than he already is?

Sure, Tomas’ data is hardly comprehensive, but it doesn’t paint an amazing picture of confidence. He ranks with the lowest AHS on tour in reefs, 3rd-worst for rights and 6-8′ waves and bottom-six for everything else.

Oney genuinely rips, and I doubt many know the wave as well as him, but his tour stats aren’t great. He finished 25th at the event in 2013, ranks worst in 1-4′ & 4-6′ waves, and bottom-5 in all other filds, including reefs and rights.

Mikey hasn’t had a bad start to the tour, but his AHS stats haven’t been impressive. He ranks bottom 3 in AHS for every wave height relevant, as well as reefs and rights.

Filipe was miles ahead of the field in Rio, impressing judges and fans alike with his astute barrel nous and air theatrics. Two characteristics that will serve him well at Keramas. I bet he’s missing Fiji from tour right now…

The only tour surfer to have made two semi-finals this season (one of which led to an event win). He was impressive in Rio, and is looking like he could be back to near-100% with his shoulder.

Gabe looked great in Rio before his QF meltdown. He’s still in the draw at Ulu’s, meaning he’s one of the few surfers with just a single guaranteed throw-away result for the season at this point.

If Caio and Kelly can find a way to keep missing events, the WSL seems happy to keep giving him wildcards. Mikey currently has the highest AHS for the 2018 season, which has to mean something’s going right.

Jordy is yet to make it past R3 this season. Actually, he hasn’t done it since Trestles last year.

So much promise so early, and yet little to show for it since.

The Wilko renaissance was something to behold in 2016. Now he’s harking back to yesteryear, when Keramas was first on tour and Wilko was nearly off it.

All wildcards have been entered and surfers reseeded: 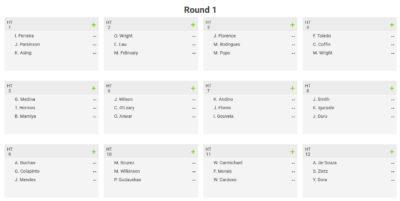 In the women’s draw, Courtney is back and we are still waiting for a wildcard.

Michel Bourez knows reefs and barrels like few other tour surfers. He finished runner-up at this event in 2013 and could be a nice sleeper for 2018.

Do you remember the way Jeremy Flores deftly wove his way through those crumbly backdoor tubes to snatch victory from John John last year? Jeremy can be a bit up-and-down at times, but Keramas plays to his strengths.

Barron Mamiya will be off most people’s radar and, while his low seeding will make things hard, he has nothing to lose and talent to burn.

Five of this year’s rookies have made the QFs, three to the semis and one to a final. We’re 3.5 events into the season. How many will you have for Bali?

It’s lucky that the Margaret River event is moving to Uluwatu, because there are few events this season that look like favouring those with their right foot forward. You can almost definitely chalk Keramas up on the pro-regular list.

Yago kept the qualification wolves at bay with another great performance in Rio. Is it just the one event that works for him, or is he building something?

Kolohe is an enigma, but he looked good at Rio.

Oney, Mikey, Miggy and Barron. A heady mix of experience, youth, hunger, energy and talent. Good luck picking either for or against any of them.

We haven’t be selecting any ‘numbers’ or ‘stats’ teams at this point in the season, as we’ve been putting all of our focus towards our own game.We’re actually about the have our first look at the initial site build this week, so things are looking up. If the tests go well, we can start importing our stats and push towards a release.

Admittedly, the process is taking longer than we hoped, but that’s only because we are creating something that exceeds all of the current gaming models, and we’re making sure that it’s being done right.

We will definitely be ready for testing soon, and I’ll be sure to let you all know when we can open it up to subscribers. Have you registered for Fantasy Surf Sessions yet?

Again, I just want to thank anyone who has donated to the site (Jeff and Adam were the latest – cheers!), and remind readers that we exist only through reader generosity. A couple of dollars here or there helps pay for site admin fees and prevents the site from being a financial drain on me and my family.