Here’s the latest regarding the upcoming Drug Aware Pro in Margaret River:

*Italo’s injury isn’t a maybe, as it’s been well documented here and here, but whether it is serious enough to keep him out of the Margaret River events remains to be seen. Watch this space.

Updated – Nat has been officially announced as Italo’s replacement. Damn, it feels good to be right.

*Fresh off the back of a forgettable performance at Snapper, Nat may yet again see himself in a WSL tour event as Italo’s injury replacement. As he finished just behind Pupo in 23rd place last season, Nat’s first in line to benefit from any injury withdrawals. The difference between Snapper and this contest is that Nat has a solid track record at this event, finishing 5th, 3rd, 5th respectively over the past 3 years.  Again, watch this space

Jesse Mendes – IN as WSL wildcard

With no surf-industry sponsor for this event, the WSL have a lot of flexibility regarding wildcards. They have decided to throw 2017 WQS leader Jesse Mendes a spot. Jesse only narrowly missed out on qualifying for the tour via the WQS last year, so he can surf a contest, but how he’ll do amongst this year’s elite is anyone’s guess.

Ok, so this is obvious. Anyone who doesn’t know of Owen’s heroics in Queensland last week has been living under a rock as far as surfing news goes. Why do we mention him? Because the heavy reef breaks of Main Break and The Box are far, far removed from the warm, sand-bottom peelers of Snapper. Owen absolutely charged heavy waves pre-injury, but how much will the consequences of a wipe-out play in his mind if the waves are 6-8′? Hopefully not at all…

Both surfers were nursing knee injuries (Conner’s was admittedly close to healed) at the Gold Coast, yet both managed to win some heats (Gabe nearly made the final). We don’t doubt that they’ll both be at this contest, but at what % of their full ability is unknown.

Could it be one of the local rippers Jack Robinson , Jacob Wilcox or Jay Davies? All three have surfed this event before…

Updated – all three of these surfers have had their data and projections added to our sortable data tables in case they are added at the last minute.

Updated – there have been some changes due to the re-seeding after Italo’s withdrawal. Nat Young is now in H4, with Wiggolly now facing Gabe instead of JJF (who has Morais instead) and Kanoa facing Jordy instead of Gabe (among other changes). Check it out in full below: 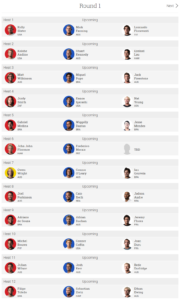