The seeding is all over the place after some of the upsets at the Gold Coast. Let’s look at the R1 possibilities for yet another historic Bells contest:

30% of WSL fantasy teams had the GOAT in their team. Despite the warnings we gave.

Kelly has given plenty of notice to the WSL regarding his injury this time, and he will definitely not be surfing at Mick’s farewell event. His timeline for a return is still pretty vague at this point:

I think it’s best that I properly rehabilitate the injury and choose to surf wholeheartedly. I’ll be back when the time is right – Kelly Slater

Michael February – IN (for the season)

February will get the opportunity to surf an entire season in 2018, with Kelly Slater’s injury opening up a Bells spot for him, and Mick’s retirement providing a place from Margies onwards.

Mick Fanning – IN (for one last hurrah)

There are going to be so many montages and songs of praise for Mick Fanning during this contest. He is synonymous with the event and still surfing better than 80% of the tour. It will be fun to watch things play out.

Julian Wilson – IN (for sure this time)

Julian played me for a fool at the GC, coming from behind an injury cloud to rain on my pessimistic parade.

Julian will surf at Bells and try to keep his momentum going. Bring on the jet ski!

The trials will most likely run in the coming days. We’ll try to update as news comes to hand, but the best way to keep your finger on the pulse is to follow us on social media: Facebook, Twitter or Instagram

The Rip Curl sponsored riders most likely to get the other spot are Jacob Wilcox or Mason Ho.

Update: the trials have been won by local Victorian surfer Carl Wright. He will almost certainly be seeded into H6 as the 36th seeded surfer.

Update #2: Lennox super-grom Mikey Mcdonagh has been given the Rip Curl wildcard.

Michael February has already been seeded into the draw to replace Kelly. The wildcards will be need to be added in the next 24 hours, but we expect that Mikey will be in H5 and Carl in H6. 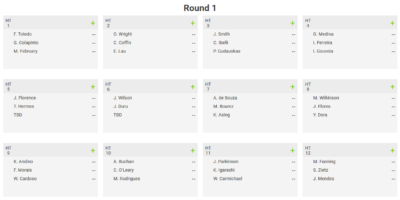 Update: Courtney has officially withdrawn and Macy has replaced her in the updated draw.

Update #2: Tweed ripper and WSQ #24 Kobie Enright has won the women’s wildcard and will take her place in H3.

The women’s wildcard has not been announced yet: