If you’re curious about how the GOAT’s going and want to delve into the mind of Mr Slater, then try this.

Nat hasn’t been able to break out of R3 so far this year, and is still looking for a big result to help with his requalification.

His overall stats for Trestles aren’t spectacular, but he finished 5th in 2015 and has only had one 25th in 4 seasons, so maybe he’s a possible gamble as a low-end option.

The 2015 US Open winner and current QS #8 has earned his place via the trials as the sponsor wildcard.

Hiroto also won the trials in 2015, losing to Mick in R1 and Kerr in R2. He is definitely a small-wave specialist, so check the forecast.

As above, Evan earned his place via the trials except as the ‘local’ wildcard. This was no easy feat given both the high calibre of surfers and the added fact that he hails from Florida.

Evan sits at 44th in the QS rankings and will therefore come in with a lower seeding.

Evan rips, finishing just outside the qualification bubble at 19th in the 2016 QS rankings. He is also familiar to some because of his serious wipeout at Pipe in 2015. He may even be familiar to non-surf fans via Luke Bryan’s video for Roller Coaster. Though, as far as we’re aware, the video has no bearing on his wildcard chances. Thank goodness for him.

The early wildcard seeding means that the draw is also up nice and early: 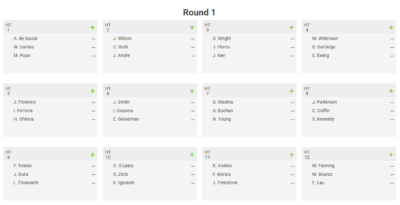