Surfer/Beachgrit said he was in, Surfline claimed he was out. Everyone else was unsure.

He’s not in the draw, so the WSL have settled the debate.

Nat got a handy 9th in France and jumped 4 places up to 29th. He could still qualify with one or two more solid results.

Filipe Toledo – IN (injured lifting up a toddler)

Really; that’s how he did it. This is a case of him being in unless we hear otherwise. He’s seeded into R1, so there’s been no official withdrawal at this point, but he is definitely suffering an injury.

Filipe looked pretty cooked in France, so be wary unless you hear an update.

As you can see below, there are two wildcards available in the WSL game. Be wary though; 11% of people owned Jesse Mendes in their QuikPro fantasy team despite the fact that he didn’t surf.

Check the updated heat draw and confirm their entry before the contest begins.

*update: the wildcards have been confirmed and are now in the official draw

Vasco Ribeiro – IN as local wildcard

The Portuguese local earned his spot via the European qualification contests. Vasco had a successful campaign as a wildcard in 2015, making the semis and beating the likes of Flores, Bourez, Adriano and Owen on the way. Definitely worth considering as a cheeky sleeper option.

Mason Ho – IN as sponsor wildcard

Mason gets the sponsor wildcard from Rip Curl. He also surfed the event in 2015, beating Julian in R2 before losing to eventual contest winner Filipe in R3 (with a 2.76 heat total).

Mason is unpredictable in contests, but we all know he can surf as well as anyone on tour.

The below draw is available on the WSL site. It’s missing the wildcards, but Vasco will be seeded into H5 against Jordy, while Mason will face John in H6 (based on WQS seeding):

*update: the below draw is complete. The wildcards were seeded as predicted. 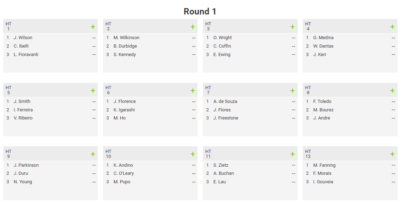