Fantasy fans and tour surfers alike have barely had time to soak up the glory that was the 2017 Gold Coast event before the  Margs beast started calling our name. Let’s see where it leads…

Is there a contest that’s harder to pin down in regards to conditions than Margs? The fact is that there are four different waves to consider, namely: the three-moves-to-the-surgeon’s-table rights as well as the big, left-hand mushburgers of Main Break; there’s the heaving deep-water ledge of The Box, and; there’s the as-yet-untested perfection of North Point. So, what to do? Study the forecast with forensic accuracy in order to predict the  most likely event site? (Yes, to a point; you’d be a fool to ignore the forecast updates.) Pick surfers that are suited to all four? (It certainly wouldn’t hurt.) Maybe run an eye over our conditions tables? (Are you kidding? Of course you should!) Whatever you do, there’s a lot to consider. Let’s look a little closer.

Put simply, all breaks are rock or reef-bottom, all can handle formidable swell sizes, and most favour right-hand barrel riders / power surfers. The latest Lipped podcast had a great analysis of the Margaret River conditions and we recommend checking it out if you have time.

The official forecast for the event looks like we’ll initially be seeing some solid, overhead, offshore conditions which will fade over the following days. The end of the waiting period is too long-term to predict reliably, but there could be some hold-days over the course of the event while they hope for a second swell to arrive.

*There is a big push, even from the WSL recently (with supporting articles) for the first day of the contest to be held at North Point before returning to Main Break/The Box for the rest of the days. Nothing has been officially confirmed though.

Based on the break features and the surfers’ past results, here are our nominations for strong ‘conditions’ surfers for this event:

John John has the best EAHS, which is always a good indicator of success/potential. He also tops the AHS for 6-8′ conditions, and reefs, places second highest in 4-6′ waves and right-handers, AND third highest for lefts and right/left combo waves. John has the conditions for this event well and truly covered. He has gone 13th, 2nd, 13th in the last 3 years. Is the pattern for another final?

Michel tops none of the AHS categories (not in the even top-five for any of the 8 possible areas), but he tops the average placing table for this event over the past three years. Regardless of how he fares in these conditions for the rest of the year, Michel knows how to win heats here.

Yep, Nat. Nat TOPS the WSL fantasy game total score averages for this event, he finishes narrowly behind Michel in placing averages (above former winners ADS and Seabass), and gets a respectable sixth for EAHS. As a small-risk injury replacement, Nat represents pretty good value.

Julian has built nicely by going 13th, 5th and 2nd respectively over the past 3 years. He has the second-highest AET and EAHS, as well as 3rd-highest AHS in 6-8′ conditions, and fourth in rights.

Wilko’s 9th here last year was the first event loss he’d had all year. It was also his best ever finish at Margs, with two 25ths to show for his previous years. Wilko has the lowest EAHS of all 2017 surfers, as well as low averages for reefs and 6-8′ conditions.

Mick hasn’t finished past R3 here in his two appearances.

While Filipe missed last year’s event with an injury, he finished 25th and 9th in the two years previous. Not horrible, but certainly not great. He has the lowest 6-8′ AHS of all tour surfers as well.

I know I said this last event, but without event-specific stats, nor numbers for reefs, bigger conditions or lefts, it’s all about gut instinct when it comes to these guys. Good luck.

It’s still early in the year, but here’s how we see the form looking this year:

John looked great in achieving his best ever result at the QuikPro last week, gaining the second-best AHS for the event in the process. He has been over in Western Australia nice and early, looking loose and getting ready. There are no sign’s of post-title lethargy here.

How on-point was Owen? He was so smooth, so relaxed, so in-control. Owen’s back, baby! (I’m sorry I doubted you, mate; can you ever forgive me?)

Connor made this list for the Gold Coast, and it seems we were vindicated. Connor performed best of all the rookies at the opening event and should hope to continue his form into W.A.

This time last year, Kelly had won 1 of 5 heats and had more people talking about his boards than his ability. This year, he looks sharper, hungrier and full of potential. Kelly should do well this year, especially if the forecast is to be believed.

Quinoa looked so far removed from the Pipe finalist that impressed many last season. He had the lowest AHS for the Gold Coast event and stood out for the wrong reasons. Hopefully he can recall some of his backdoor magic.

With so many rookies impressing at Snapper, Leo was lost in the crowd. We did warn about his form for the last event, and we were right. He did well here last year as a wildcard though, so maybe he’ll turn it around.

Josh also looked flat at the Goldy, losing to rookie Gouveia in a forgettable R2 heat.

While much less important when compared to conditions and form, the draw should still be a partial consideration. Having 3 surfers in a R1 heat, or worse 2 surfers facing off in R2, is bad form. If you want to play around with heat win and R2 possibilities, we recommend wslbracket.com as a fun way of predicting possible result match-ups. Be aware though that a single change from your projections can alter the following round entirely.

Italo is out, Nat is in and we’re still waiting for a trialist. Our R1 “heat of death” nomination for this contest is H11: Julian/Kerr/Bede 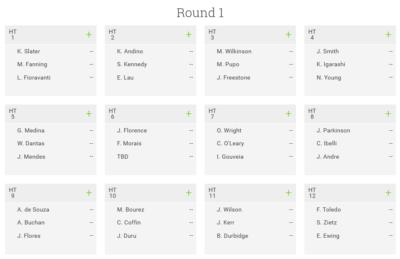 We like to offer a few suggestions that may not be on everyone’s radar. Any success that involves deviating from the popular vote will provide a huge advantage for players willing to take the risk. Since the % owned feature from the WSL and FS games are invisible until lock-out, we are simply predicting who we think will be low in the popularity stakes.

We would have said Italo here, before he was injured. Now we’re going to go with Joel instead. He looks so good this year, and he could kill it at any of this contest’s venues. Parko probably won’t be owned by less than 10%, but Gabe, John, Kelly and Owen will likely be more popular.

How stacked is this section: 2016 champ Seabass, 2015 champ ADS, 2014 champ Bourez, as well as Jordy, Mick, Kolohe, Julian and Flores. Tough to pick a dark horse amongst those, but we’ll try: Zeke deserves a shot after his heroics at Snapper and his potential in the big stuff. Get into him.

We are repeating ourself here, but we’re going to throw our weight behind Ethan Ewing at this event. He was very unlucky to lose after surfing so well at Snapper, and I’m willing to give him another shot. I doubt many will have him.

For each event we will produce a list of ‘outliers’ that represent some kind of anomaly within our selection analyses. Maybe there are factors that a spreadsheet can’t detect, maybe all of the numbers point a god-awful result at this event, or maybe their recent form simply contradicts their previous averages.

Here are our outliers for Pipe:

How do you even begin to balance the conflicting forces of his brilliant comeback and scintillating style vs. the large swell forecast and the unknown fear factors relating to surfing these breaks. I’m willing to back Owen’s credentials out here, but I’ll be glued to my screen when his first heat starts.

Jay Davies has done well here in the past, especially at the box. Likewise Jacob and Jack could tear this whole event to shreds if they get the spot. The fact that we still don’t know who’ll be there is enough of an unknown, but add to that the talent pool on offer and you’ve got a tough choice. Pay attention and you could benefit where other miss out.

Two words; that knee. We haven’t heard a thing. Is that good?

Bede can absolutely tear those massive forehand hacks that the judges seem to love out at Main Break, but he’s unproven in the big stuff post-injury. We expected more from him at Snapper, so we’re a little wary.

Hear us out here: if there ARE some lay days, venue changes or holding periods, surfers with focus, patience and drive will be the ones on top. Consider this as you check the final forecast and lock in your team.

Here are our “numbers” teams: a selection overview based purely on our projections. If you really want to see/beat our non-numbers team, join the clubhouse (it’s not that hard – in both cases).

Nat, JJF, Slater, Gabe and Mick are all solid. Leo too. Ethan and Joan were massive surprises, but the small-sample data for rookies is always going to throw out anomalies. We’re just rolling with it. Lots of potential for R2 or R3 friendly fire given the high/low end balance.

Ethan and Joan pop up again. Flores gets the nod, as does ADS and Julian. No Gabe, Nat or Leo.

Now that you know the team break-downs, it’s time for you to create a team that will hold our selections to account. Sign up to our WSL Surf-Stats group (password – SS) or the Fantasy Surfer Surf-Stats clubhouse and challenge yourself against us and our readers. We will give a shout-out to each winner and analyse their team.