Trainspotters may have noticed that I didn’t manage to throw up a post-Bells wrap. I owe all 16 of my regular readers an apology; I just got snowed under and let it slip. I hope my abbreviated version below will suffice (to those uninterested on my Bells musings, just scroll a little down the page and you can read the regular preview):

Wave of the Event

It may not have had the classic Bells lines that we know and love, but John’s 9.63 on a maxed-out bomb was a sight to behold. Watch it again, and look at the massive drop. Look at the chatter pulsing through his board from the face of the wave. Look at the speed. The last 2 turns. The apparent ease with which he does it all. Then imagine yourself trying it.

Move of the Event

If this was based on the one manoeuvre most regularly rewarded by the judges, then John’s end-section layback-reo has to win hands-down. The thing is, as predictable as it became, it was still sublime in places. He got a 9.5 against Jaddy for two of them and nothing else.

Heat of the Event

Unsurprisingly, this was another ‘early final’ starring John John. This time he was up against Gabby – who did put up a decent fight – and again he proved the victor.In the end it was John’s event and Medina proved just another victim on his road to Bells glory.

Bells By the numbers

1 – number of CT finals Toledo has lost in his career. Until his Bells loss, he was 7-0.

6 – consecutive finals won by Courtney Conlogue. Her last 2nd place was at Margaret River in 2016.

Firstly, I refuse to call it the Bali Protected.

I’m all for minimising single-use waste, and I think the WSL’s moves towards environmental sustainability are a welcome addition to the tour, but that name is just so contrived and awkward; I can’t do it.

Keramas takes bits and pieces from several familiar contest breaks, but is unlike any of them as a whole. It can, at a stretch, be linked to Trestles in that it’s a medium-length ride, with high-performance opportunities. It’s a reef though. And it barrels much more often. And there’s no left. So it’s pretty different.

For those who like visuals, Kelly did a 2018 ‘vision’ clip for Keramas, in which he used the term ‘high-performance’ about 4 times. There are also ‘spot check’ videos/articles from Surfline (with Rizal), Red Bull (with Jordy) and Surfline again (with the WSL). Ben Mondy also gets all historical and important-sounding for the WSL here.

In short, Keramas handles swells from small to overhead, but is most likely to break in the 4-6′ range (hence our inclusion of 1-4′ and 4-6′ wave data in our metrics). It suits high performance surfers, and it tends to favour regular-footers more than goofy unless their name is Italo. It can get a little shallow and heavy, with the reef being known to take souvenirs. Finally, it often suffers from onshore winds that creep up almost daily around lunchtime, meaning that ‘air winds’ are be a big opportunity for surfers with above-the-lip prowess.

I’m not sure where you all stand, but when I hear ‘fun-size’, I try to keep my expectations in check. The phrase ‘for at least the mornings’ also tells me that it could be worthwhile taking a shot on surfers with some above-the-lip nous if they’re in the later heats of a round.

Adriano de Souza – Adriano’s knee injury continues to see him miss events. There has still been no official ETA on his return.

Tyler Wright – Tyler Wright has officially withdrawn from the first half of the tour, with the hope of returning for the J-Bay event. She is, by Stab’s accounts, suffering from post-viral syndrome and chronic fatigue. We wish her a thorough and speedy recovery.

Caio Ibelli – he narrowly missed a second consecutive 33rd at Bells and will be replacing ADS again.

Sebastian Zietz – the new dad will return to competition after welcoming Milly Rose into the world.

Griffin Colapinto – is in the draw at this stage, but hasn’t surfed a whole heap in the lead-up to event 3 .

Silvana Lima – returns from injury at the expense of Sage Erickson.

Jacob Willcox – Rip Curl’s Twitter feed dropped some knowledge on us regarding Jacob’s reward for his Bells success; he’s been awarded a wildcard spot in the Bali Pro. I wonder how replacements Frederico and Ethan feel? Jacob is seeded as 35th.

Kailani Johnson – the first female surfer from IND to represent on the WCT will take her place at the 2019 Bali Pro. Stoked for her!

Local Wildcard (Rio Waida) – nothing has been announced yet, but the highest-ranked Indonesian surfer on the men’s QS is Rio Waida, so he could be a chance. Update: Oney didn’t make any more heats and Rio has been given the spot. By all accounts he rips and is a great kid. Read his Quiksilver bio and watch him surf here. Rio is seeded as 36th.

Below are the heat draws without the above wildcards:

If you love tweaking heat scenarios and playing around with results (who doesn’t), then check out surf-stats reader and fellow surf nerd Erik’s newly updated WSL Bracket app; it has all of the new seeding formulas built in to let you know what potential match-ups you can expect:

Given there have only been 2 events here on the men’s tour, and just the one on the women’s, there is limited scope for historical result analysis. That said, FSS gives you access all men’s event and surfer history from 2013-2019.

While there are many stats integrated into the FSS game, not everything fits neatly into the formatting. For that reason, I’ve added some more detailed data below. Sort through and take what’s relevant to you:

N.B. All data is sourced from our FSS files, which are from 2013-2019 inclusive.
For 3-man heats where 2nd place progresses to the next round, a 2nd placed finish is deemed as a heat win.
All columns are sortable.
AHS = Average Heat Score
SS Rank = event ranking based on surf-stats metrics

John – he’s back. 2019 has been his best start to the season ever. Dominates rights, reefs, and event AHS data.

Jordy – I keep saying this, but nobody seems to believe me; Jordy’s data in small waves is almost unmatched (*ahem, Filipe). He has good metrics for this event, and his averages in rights are also impressive. He falls *just* behind JJF in our metrics.

Lakey – won the only women’s event held here (last year) and is at the forefront of progressive women’s surfing.

Toledo/Medina – let’s be honest, you can’t afford these two AND the Italo/John/Jordy trifecta. Even if you got John cheap. These two could just as easily do well out here, and rank 4th and 5th in our data sets, but you’re going to have to make a call. Ah, fantasy sports.

Michel – two events here, two finals. He may not jump out as the perfect Keramas guy, but he has the runs on the board.

Caio – has looked a little off the pace since returning from injury. Hasn’t surfed this event before, either.

Kelly – missed this event last year, so much of his data is drawn from 2013.

Kolohe – winless at the Bali Pro in two attempts. Keramas should suit him down to the ground, but…

Keely/Paige – the only surfers on either tour to remain winless all season.

Italo – has been sporting an ankle brace lately. He’s still ripping though…

Here’s the thing about data-driven fantasy selections: they almost always guarantee you a safe, bankable score. What they don’t earn you is a winning score, a score that takes risks with an against-the odds darkhorse-come-good. For that, you need to back yourself with a solid sleeper pick. Here are my non-data-based suggestions:

*N.B. the WSL fantasy game has based their tiers on surfers’ 2019 RANKING only, which is basically their result at the first two events. This is despite the fact that the WSL’s seeding ranks are markedly different. The price structures for the FSS game take into consideration seeding, not ranking, as well as other relevant metrics for each event.

High End – Kolohe could be the best against-the-grain pick here, just because so many people will be feeling burned by his Bells loss. Risky, but potentially a true sleeper against the big names in this tier.

Mid Range – Peterson Crisanto is my gut pick in this tier. He has a few good stats in rights and 4-6′ waves, but the data pool is too small to really have weight.

Low – Not Soli Bailey. He’s burned me twice now, so I’m going to pick someone else (watch him fly!). I’m backing Seabass to pull a post-parenthood-high result.

Goofies – I’m calling that one of the new-school screw-foots (Ryan Callinan, Jacob Willcox, Yago Dora, Caroline Marks et al) will pull an Italo and dominate the event with some backside wizardry. Which one will it be, though?

Kelly – he won ugly at Bells, but he won heats. Momentum’s a funny thing.

Mikey/Griff – be wary with both of these two as ongoing injuries are definitely a factor.

Thanks again to all the players who selected teams.

These prizes will be the awarded at every event this season, so remember to register your team and tweak those picks using the integrated surfer/event data. 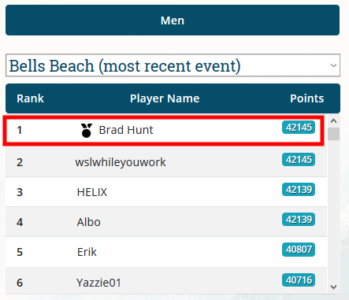 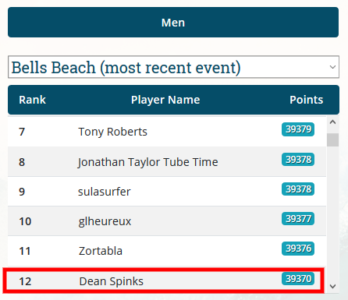 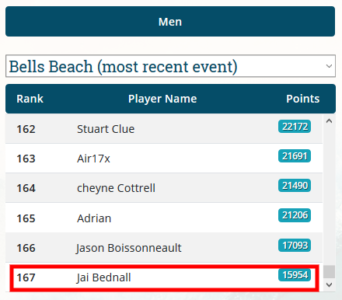 We’re still working on our big ‘season winner’ prize, but we hope to finalise things and announce something soon. At the moment, WSLwhileyouwork is holding pole position: 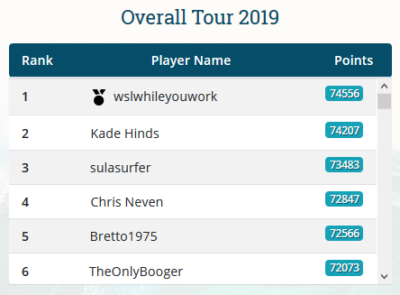 As always, feel free to give us feedback or suggestions on how to improve the game, and don’t be shy in sharing/recommending us; more players means more prizes and support for our grass-roots partners.

Good luck with your fantasy teams.