Where did that come from? Who the hell cares; it was just so good to see that he’s still got it. Welcome back Owen!

There’s been so much written about Owen’s comeback (and deservedly so) that I won’t waste too much time revisiting. Suffice to say that we certainly missed the boat regarding him as a fantasy suggestion. We weren’t Robinson Crusoe there though. What I did want to make clear was that, despite some of the grievances that I’m about to spew forth, I have absolutely no intention of taking any of the shine off Owen’s incredible victory; he ripped, he competed very cannily and he deserved the title. No question.

I’ll start with the positives:

Now for some criticisms. Let’s start with the judging…

Surfing is subjective; I get that. We can’t expect all surf fans to appreciate the exact same style, approach, technique or choice of manoeuvre as one another in a sport that is so diverse and personal. There is no ‘one’ way to ride a wave, and while we can almost all agree on what good and bad surfing looks like, what we are asking our sport to do is to decide which of two or three surfers is ‘better’ within a 30-minute window. Our judging system is the best way that we currently know of to do this; five judges, drop the extremes, find an average. That seems fair to me.

What isn’t fair is the seeming emergence of the judging ‘agenda’. I don’t know if it comes straight from Richie Porta, or elsewhere, but I know that it creates a veritable mixed bag for pros, fans, commentators and fantasy players alike when a particular approach or criteria seems to be garnering the preference of the judges at particular contests. Are the judges rewarding barrels at this event? On-rail surfing? Vertical manoeuvres in the pocket? Variety? Progression? Who knows until the contest starts and a pattern starts to emerge…

The official line from the WSL website is that the judges analyse the following elements when scoring waves:

I can’t fault any of them; they are a comprehensive list of quality surfing criteria. However, the apparent agenda seems to emerge when certain elements of the criteria are given more weight than others. For example, here’s how I saw Snapper being scored:

Barrels were hit-and-miss with the judges, as were airs. Variety was often ignored, especially for some backhand surfers (yes, I recognise that there was slight variation in a number of similar manoeuvres, but they were still highly similar). Even commitment and degree of difficulty was neglected in some places, with safer surfing scoring well. Yet even this doesn’t frustrate me a great deal.

Here’s what annoys me: the hierarchy for these criteria seems to change without notice. I can deal with them being weighted, and I can deal with the weighting being adjusted between venues (i.e. barrels for Tahiti, progression for Brazil, etc.), BUT there has to be transparency. For the surfers. For the fans. For the commentators who sometimes sound as bewildered as the rest of us. And for the god-damned fantasy players who have their pride and/or money to lose amongst their mates. Tell us what the judges are looking for, BEFORE the contest starts, and we will all understand the process. Please. Because this crap shoot system is leaving me a little jaded.

I mean, nearly over; I have a few more criticisms of the contest:

Congratulations to the following clubhouse champions:

Surf-Stats FS group event – well, we screwed this up somewhat. We now have two FS clubhouses, one from last year and a new public one this year. Here are both results:

Private Clubhouse (password SS): All Push, with a respectable 932 and 203rd place overall.

We will most likely consolidate these two clubhouses together, depending on numbers.

This 695.7 point team was not selected by any teams, however Surfadas&Pranchadas and Newy green tied for first with a close 659.29. Wilko at 10% and Frederico at 3% were quality selections. 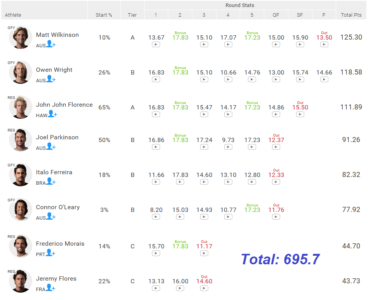 The reigning Pipe champ, a former event winner and an AHS stats favourite were all in this list. Julian actually did OK, but he was still the 2nd-lowest Tier A option. 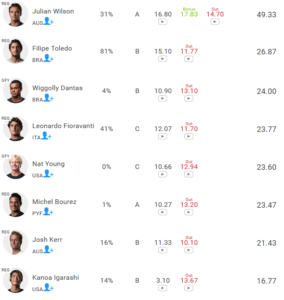 Barely a pass-mark. Tier A were solid, and Joel was too, but Filipe, Wiggolly, Mick and Ewing under-performed.

Pretty similar to above. Just substitute Toledo for Duru.

These winners are in the running to claim the overall SS awards at the end of the year:

Best wave: Slater’s R3 gem against Frederico was classic Snapper, as was Mick’s under-scored 7.17 against Owen, but the wave of the contest has to go to Zeke’s 10. How many people would kill for one of those Superbank sets?

Best heat: Flores vs. Ace in R2 was tight. Owen vs. Mick was pretty epic as well. Slater vs. Medina had it all, but the Jordy vs. Zeke, in perfectly barrelling dusk conditions was what this contest is all about. It’s just a pity about the fat sections through the middle.

Biggest disappointments: Filipe hurt a lot of people’s team, but the judging inconsistencies and the poor waves in the final were the equal losers for this event.

Best Manoeuvre: Was there any doubt? Italo has won three of these awards now if memory serves correct.

For now, we’re done. We don’t have long before the Margaret River contest, so we’ll crunch the numbers and get them out soon.

If you can, hit up our PayPal ‘donate’ button at the top. We have absolutely no plans to make this site a paid subscription service, but we do run this site at a loss (in our spare time), so anything you pay will help the site stay online. Cheers!