Is there a more entertaining individual in pro surfing right now than Jordy Smith?

He’s an incredible surfer, yes, but he’s also a world-class claim choreographer, a heart-on-your-sleeve emotional roller-coaster, a universal icon for hair stylists everywhere. And now, he’s a bona-fide philosopher. Nobody, not Longtom, not Doherty, not even Potz himself, has been able to use such efficiency and poetic flair in describing this contest.

Was it epic? Not really. Did it live up to the J-Bay standard? No. But it did throw us a few tasty crumbs:

And, if you collect all of the crumbs and arrange them just right, you get a loaf of bread that can sustain you until Trestles comes along. Thanks Jordy.

A massive blow for the champ. I can’t help but think it will be a good thing for both him and for surfing in the long run. The 2018 title beckons (and I’m only kidding a little).

Also, can the WSL make hay from Kelly’s injury while the sun shines? His commentary chops are unparalleled, as anyone who listened to his summation of Mick and Gabriel’s QF heat with Rosie can attest. If the WSL could just get him behind the mic for the rest of the season, I think he would drop more insights into professional surfing than we mere mortals could even comprehend.

Medina is looking like his nasty old self again. He’s building momentum – 3rd and 2nd in his past 2 events – and he’s surfing with more confidence than I’ve seen for some time. He’s even regained some of that youthful petulance that made him so entertaining.

Gabriel was very impressive here at Tahiti and, with the don’t-let-a-surfer-win-twice pattern so far this season, perhaps he’s due for a win.

He was incendiary at J-Bay, and (admittedly small) Tahiti gave Filipe an ideal opportunity to push back against all of the rumblings that whispered doubts about his title credentials; can a surfer ever win a title without a left-hand reef game?

So, did he step up? Did he use the variable winds and weak swell to fly above the critics and silence the naysayers?

In two words: He didn’t.

In three words: He fucking choked.

This time last year, there was a rookie who was doing things rough; he was winless from six events and down on confidence. Back then, after another R1 loss, it seemed that Tahiti would be just another roadside attraction on his world tour of suck. But no! Despite drawing a formidable Brazilian in his R2 heat, this plucky young man found a way to negotiate the challenging conditions and taste the intoxicatingly sweet joy of victory. What a result for the ages. What a feel-good moment.

Ethan Ewing is no Alex Ribeiro, but I couldn’t help but see the parallels as I watched R2 unfold. Uncanny.

Ribeiro backed Tahiti up with a 5th at Trestles last year. Do you remember that? I’d forgotten. Maybe there’s hope for Ethan yet?

Maybe surfers were claimed-out after J-Bay, or maybe they just struggled to get excited about the waves on offer, but the claim show was on the back-burners for this one.

While not technically commentary related, I was disappointed at the lack of attention paid to live action when showing highlight reels or replays. Twice during the final, the webcast AND commentary team were focused on something other than live action while a surfer quietly ripped the hell out of a wave in the corner of the screen. For Julian’s 9.23 it took a few minutes before they even realised that they’d missed something.

Meh; the thing about judging is: if it doesn’t stand out, then it’s probably good. After J-Bay’s 10-fest it seemed pretty fair to me. The only trend I found interesting was that, post barrel, judges seemed to be rewarding the classic fist-pump-to-flick-off manoeuvre more so than any genuine attempts at turns on the face. Not every time, but many times.

3 – times that Julian has beaten Medina in a final (Pipe, Portugal, Tahiti)

1 – times Gabe has beaten Julian in a final (France)

7 – surfers who have won an event in the past 7 contests (it’s 8 from 8 if you include Kanoa at Pipe last year).

3 – days required to run the full event (a record)

1500 – points separating 1st place from 4th in the title race

None of the top surfers were able to pull away for a massive lead, but we’ve seen some subtle changes at the top; Jordy take the Yellow Jersey, while John keeps his second place narrowly behind. Wilko slips to third but is still well in the mix.

The biggest jumps were for finalists Julian and Gabriel, who could legitimately claim to be contenders with 4 events remaining. 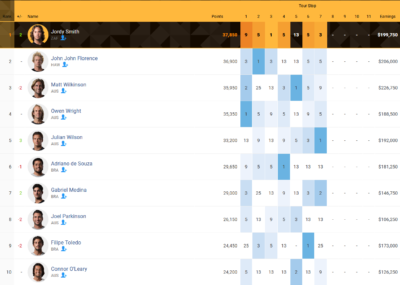 Congratulations to the following clubhouse champions:

Surf-Stats WSL group – Anatoly posted the best team in the clubhouse, scoring 595.19 despite having John instead of Julian. Eddie Utah kept his lead and sits at 79th in the world overall.

FS Public Clubhouse: J-Bay winner Gaybriel Mangina made it two-from-two with his 1003. Mahos maintained his lead with a handy 989.

FS Private Clubhouse (password SS): 2016 contender The Badger threw his hat back in the ring with a respectable 980. He placed 733rd overall for the event. CC Babcock maintained his clubhouse lead with an 849.

In Fantasy Surfer, the perfect team was again too expensive. Even at their cheapest values, Jordy, John, Owen, Medina, Julian, Kolohe, Wiggolly and Joan would have cost you well over $50M.  Backdoorbandit went closest, with 6 of the top 8 (no John or Kolohe) and no 25ths earning him 1115.

The best possible team in the WSL was a little lower than other contests, with few Tier C surfers making it far into the draw. Robert managed to be the only player to select the perfect team on the WSL game, with the team below: 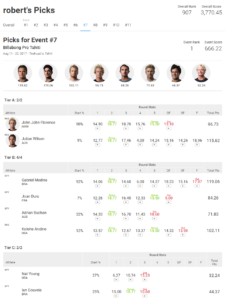 Not too many people were stung by these 8 surfers, with Toledo, Pupo and Frederico the only surfers whose percentage reached double-figures (barely). 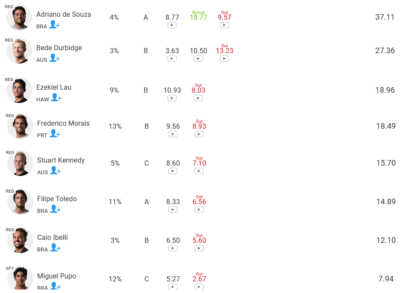 Best wave: Gabe’s 10 was incredible; he was so deep that he had no right making it out, plus he topped it off with some great turns.

Best heat: It’s always good when a final provides the crescendo to a contest. Julian’s unlikely comeback against a red-hot Medina was quite a spectacle.

Biggest disappointment: The waves were pretty poor at times, and there were a few surfers who failed to step up to the plate, but generally my expectations were low enough to avoid any major disappointments.

Best Manoeuvre: I’ve generally skipped barrels in this category in favour of manoeuvres that are performed on (or above) the face of the wave, and I’m not changing that now. There were some very impressive barrels ridden, but Gabriel Medina’s grab-rail-cutty-to-driving-bottom-turn-to-snap was probably the most impressive thing I saw outside of the barrel.

Most impressive: Jordy surprised, Ewing exalted and Julian was truly excellent, but Gabe was consistently the form surfer of the event. His AHS stands as proof.

That’s it for the Pacific island leg for 2017, but the metrics for Trestles will be up in a week or two.

Thank you to all of our readers who continue to donate via the PayPal button. Surf-Stats is completely run in my spare time and funded at my own expense; those donations keep my domain and hosting fees paid and also help me justify the nights spent on spreadsheets. Plus any donation, however small, will help me convince my wife that people actually read this shit.