Before I kick off, I want to give a shout-out to Matt Warshaw’s Encyclopedia of Surfing. It’s at risk of being lost due to a lack of income, and it would be a dark day for surfing if that came to be. If you don’t know what the EoS is, then let me give you a quick run down:

Awesome, right? And the price? US$3 per month. For the lot. Sign up now and help save this glorious contribution to our sport.

If you don’t want to subscribe, there’s always the option to donate. 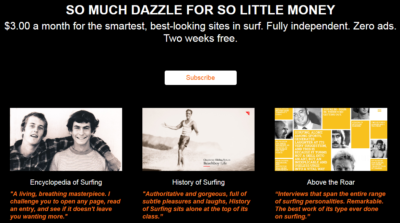 Now. To the preview.

I love a title showdown at Pipe.

And given the proposed changes to the 2019 tour, this could be our penultimate opportunity to soak one up. It’s gone down to Pipe in 5 of the past six years, but it never gets old as far as I’m concerned. Each time feels like the height of professional surfing’s potential.

So, shall we start with the title scenarios? I know that fantasy is more about your own clubhouse titles than the WSL championship, but we’re all surf fans here, right? While every man and his dog have weighed in on the ins and outs of the possible outcomes, the simplest snapshot is this one from the WSL:

Put simply, John is still very much in the driver’s seat; he only needs to make it past R3 to eliminate Julian and force Gabe and Jordy to make the final. If he makes the final, he can be the champion (again) without winning Pipe (again).

You’ve heard of it, no? Even my ‘surfing’s your thing, not mine’ wife knows it fairly well, so I’m not going to bore you with all of the patronising details. If you want a (slighly older) snapshot of the break itself, try here. If you want to school yourself good and proper, you can get the Surfline mechanics of Pipeline degree and bug your friends with all sorts of detailed knowledge about a break you’ve probably never visited in person.

It is worth noting that sand can be a bigger factor at Pipe than you’d expect for a reef break, especially early in the season (now). Also, the swell direction will have a big say 0n whether you’ll see more lefts or rights ridden.

Watching the trials event, the lefts seemed to be pinching much more than the rights. This could have been partly due to the swell direction, but I’m not sure if the sand build-up was also playing a part. It’s worth noting though.

The official WSL forecast tells us that swell will not be an issue for this event. In fact, the term ‘maxed out’ gets a pretty good run. Overall, the conditions look patchy; the winds aren’t fantastic, the early swells are a touch north and there is a chance for some big days that will be unsurfable. It’s a pity the Eddie won’t go. There is a possibility also that we could see some good days right at the end of the waiting period, especially since the sand should have been washed off by the two big swells previous. Those long-range forecasts are always dicey though, so expect to see a few bumpy days at Backdoor in the early rounds.

As Jed Smith would say, Are You Keeeeding Me?!

Slater is the most successful competitive surfer of all time at this event, winning an amazing 7 Pipe titles. Not bad for a Florida boy.

He has the best average placing over the past 10 years (and it would be better if you went further back), ranks in the top 5 AHS fields for wave heights 4′ – 10+’, reefs breaks and lefts, and consistently finishes in our top 3 for projections at Pipe, Backdoor and both venues combined.

John ranks at the top for every conditions category except 4-6′ wave heights and right-handers, for which he ranked a close second in both. John’s experience at Pipe and suitability for both lefts and rights at the famed reef are unquestionable, as is his overwhelming favouritism in our projections. The only facet that doesn’t point directly at John is his average placing; he has only made one final in 8 attempts and is yet to win a Pipe Masters title.

Medina’s greatest attribute is hard to quantify; tenacity doesn’t naturally fit within a value system. Regardless, his numbers in these conditions are impressive. Medina has a (very slightly) better average placing at this event, but in fewer attempts. He, like John, is still searching for his maiden win, but he has made two finals in the past 3 years. He also has a better fantasy score average at this event than John as well as a superior AHS in 4-6′ waves.

Gabe is projected to have the 2nd best AHS across all three venue options (Pipe, Backdoor, Both), so he is well worth the risk if you can afford him.

Wigs has some poor AHS data across key fields, especially the event AHS. He has only made one heat here in two years as well.

Jaddy has surfed in 6 Pipe Masters events, for 2 heat wins. His AHS in this event over the past 3 years is 7.6.

Can you see a pattern here amongst goofy-footed Brazilians this year; Medina is a statistical anomaly. Pupo scores poorly in reefs, large waves and EAHS.

Do you know the last time Gabe lost a heat? Go on, take a stab…

Did you guess R3 at Trestles? He even won the Future Classic at the Ranch within that time too, so you could say he’s gone 3 straight (but don’t; it’s not true).

Gabe is on a serious heater right now, and his form is unquestionably the best on tour at this moment.

Chloe has made 3 of the past 4 semis, with the equal-top number of heats surfed (with Seabass) in the past 3 events.

John’s won 75% of his heats this season (Gabe is 2nd-best with 69.8%). He has the best AHS for the season  and he is the only surfer to have won 100% of his R1 heats this year. He also has the best AHS over the past 3 events AND has not finished worse than 5th since all the way back in Fiji.

Owen had a 9th in France, but it was sandwiched between two 25ths at Trestles and Portugal. Where is the feelgood, comeback kid from the Gold Coast?

Slater has NO recent form in a contest singlet due to injury. R1 at J-Bay was a long time ago. Does it matter?

While only a minor consideration when compared to factors like conditions and form, the draw should still warrant a passing glance. Having 3 surfers in a R1 heat, or worse 2 surfers facing off in R2, is bad form. If you want to play around with heat wins and R2 possibilities, we recommend wslbracket.com as a fun way of predicting result match-ups. Be aware though that a single change from your projections can alter the following round entirely.

Slater is in, Nat is out, and wildcards have been decided:

Trials winner Dusty Payne will surf against John and Wiggs in H6, while trials runner-up Benji Brand will get a start against Jordy and Pupo in H5. 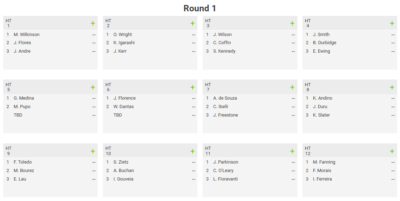 We like to offer a few suggestions that may not be on everyone’s radar. Any success that involves deviating from the popular vote will provide a huge advantage for players willing to take the risk.

To be honest, ‘top tier sleeper pick’ is a bit of an oxymoron. Jordy’s numbers aren’t as bad as you might think at this event, and with a big chance that it will be held at Backdoor most days, he could surprise this year.

We picked Seabass in this category for Portugal and he didn’t let us down. The thing is, he was owned by 48% of players. Hardly a sleeper. Conner’s win at Sunset gives him some nice momentum, so he gets our vote here. Let’s see how many players do the same.

Josh Kerr has no pressure to do anything other than enjoy himself after announcing his retirement. He has a fairly good record at Pipe and isn’t afraid of the big stuff.

It’s been a long time off tour for the GOAT, and his foot is mostly untested.

Both Dusty and Benji have the ability to upset the top seeds out here.

He gets a bad rap at venues like these, but if it’s a feathering side-shore into a 6′ backdoor gem, he could do something amazing. Again.

Remember that injury two years back? I bet he does. I know for a fact that Owen has already been out at Pipe, slaying demons and getting ready. I know also that we’ve seen him charge some heavy stuff already this season without hesitation, but surely it will be in the back of his mind once the swell pushes up. Then again, maybe I’m just projecting my own inadequacies onto the poor guy.

We’ve largely ignored him because his data hasn’t been extreme enough in either direction to single him out, but Joel could be perfect for the forecast conditions.

Here are our “numbers” teams: a result of our selection process based purely on projections. They rarely suck, but they don’t predict the dark-horses either. Join our leagues and see if you can wax them:

If you haven’t already, check out my new fantasy surfing venture, fantasy surf sessions, and register your details so that you’re amongst the goodness in 2018…

If you surf, then you need to read this piece by LongTom, aka Steve Shearer. It’s good.

Lastly, a big thanks to all of our readers who have donated via the PayPal button. Surf-Stats is completely run in my spare time and funded at my own expense; those donations keep my domain and hosting fees paid and also help me justify the nights spent on spreadsheets. Plus any donation, however small, will help me convince my wife that people actually read this shit.