As a proud Australian surfer, even I have to admit that 3 events is a lot for one country. No other country gets more than one (except the USA, which has one event in a pool that is hours from the coast and one event in Hawaii, whose surfers generally don’t identify as American). And yet Australia gets three.

One thing that the Australian ‘leg’ has going for it is diversity: The QuikPro offers potential cyclones, ludicrous crowds, sub-tropical water, sand bottom points and a city that lives and breathes surfing culture. Then there’s Bells, which offers historical relevance coupled with cold, deep-water waves that surge from the antarctic and challenge surfers to find new lines and discover their rails. Finally, we have Margaret River. Western Australia is wild, remote, raw and, at times, unforgiving. There are so many world-class waves up and down its coast, but most of the time you need to earn them.

After John’s seething destruction of the Main Break walls last year, I’ve had an increased appreciation of what can be achieved at this event. The bar has been raised very high.

Let’s have a look at who will, statistically, leave Australia with stories to tell, and who will leave with their tail between their legs.

The WSL have really outdone themselves with their background prep for Margies this year. You have the WSL event guide here, plus a great Ben Mondy overview of the place here, there’s also a detailed surfline break breakdown, as well as Slater’s new WSL series, ‘Vision’, providing his insights into Main Break, the Box and North Point.

For those too lazy to bother clicking hyperlinks, I’ll counter your laziness with some short cuts of my own; here’s my (edited) overview from last year:

Is there a contest that’s harder to pin down in regards to conditions than Margs? The fact is that there are four different waves to consider, namely: the three-blasts-to-the-surgeon’s-table Main Break rights; the big, left-hand mushburgers of Main Break; the heaving deep-water ledge of The Box, and; there’s the (edit: tested, but not in the right swell conditions) perfection of North Point.

So, what to do? Study the forecast with forensic accuracy in order to predict the  most likely event site? (Yes, to a point; you’d be a fool to ignore the forecast updates.) Pick surfers that are suited to all four? (It certainly wouldn’t hurt.) Maybe run an eye over our conditions tables? (Are you kidding? Of course you should!) Whatever you do, there’s a lot to consider. Put simply, all breaks are rock or reef-bottom, all can handle formidable swell sizes, and most favour right-hand barrel riders / power surfers.

Like Bells, surfers who have shown success at heavy-water QS events such as Sunset or Haleiva are generally going to be well-suited to the break.

The brief – but promising – official forecast points to:

Did they say North Point? The winds may not be ideal, but we can live in hope…

John could continue his humbling season here at this event and it wouldn’t matter; last year’s performance will see him etched into Margaret River Pro folklore in perpetuity. The thing is, his stats don’t just shine in the 2017 event:

In the WSL game, he’s in tier C, and in FS he’s a relatively bargain-basement price of $10.75M, so if you still need convincing, I can’t do much more.

Bourez’s history at this event reads: 1st, 5th, 13th, 5th, giving him roughly a QF average. He has surfed 20 heats here (=1st with ADS) and averages just over 13 with his event AHS (11th overall). Michel is well-suited to the conditions, despite some only-slightly-better-than-average conditions averages.

Update: Flores has officially withdrawn to spend time with his partner and their newborn daughter. He has been replaced by Kael Walsh, who finished 2nd at the event trials today (see draw below) as well as freesurfing with John John. Here’s an edit of his from January.

Despite his Hawaiian pedigree, The ‘Nu has won 0 heats at this contest. He also owns the dubious honour of having the lowest Event AHS, with a mere 7.35 from 4 heats. He sits in the bottom-three for AHS in reefs, left/right breaks, as well as both 6-8’ and 8-10’+ waves.

Wilko has bettered a 25th at this event only once in his 4 attempts, managing a 9th in 2016. He has the 5th-lowest AHS for the event and 6th-worst AHS in left/right breaks.

It’s still  early in the season, but there are a few patterns emerging thus far.

Italo made this list before Bells, so you can only expect that he’ll be here now. He tops the AHS for the season and sits 2nd only to Julian in season win % (Julian has won more R1 heats). Italo is enjoying a purple patch this year, and I hope he can continue.

Michel sits just behind Italo in both season AHS and win % stats. He’s sitting =4th for the season (behind Mick, which means he’s =3rd) and he just looks solid.

Gabe’s results at Margs are patchy (he’s had 2x 25th), but he seemed to find another gear at Bells (another venue at which he has a mediocre history) and looks to be building something. Gabe seems to be flying under the radar a little this year, but I wouldn’t be surprised if the surfing world takes a little more notice after Margs.

Also, I know the above paragraph is far from stats-based, so I’ll point to the fact that he has the 5th-best AHS and 6th-highest win % for the season.

Freestyle may have won his R2 heat at Snapper, but he still boasts the lowest AHS for the season at 8.23 over 4 heats.

Like MFeb, both of these Hawaiians are sitting at =26th in the world, after posting a 25th, 13th start to their season. Both have won this event, so their ability to turn things around here will be telling.

Our R1 “heat of death” nomination for this contest is a tie, with H5 and H10 both looking stacked.

Mikey and Miggy have been added, Flores withdrawn and two local wildcards inserted as well. 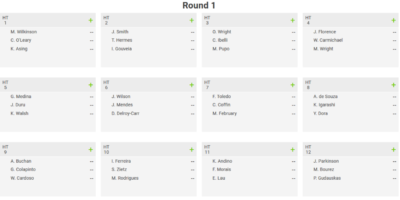 In the women’s draw, Courtney has been replaced again by Macy C, with Mikaela Greene earning the wildcard spot via the local trials.

I doubt he’ll have a super-low ownership, but Owen Wright has been quite the dark-horse this season. I think he could sneak up on a few people again at this event.

There aren’t many quiet achievers here, .

It looks like Flores went with option b) (below), so I’m in need of another Min-range sleeper. I’m throwing my weight behind Mikey Wright for this one; regardless of how many heats he makes heats, he can be relied upon to go down swinging.

Can you believe JJF and Seabass are both Tier C on the WSL game? They hardly count as sleepers though. I’m going left-field and suggesting Jesse Mendes could win a few heats and justify a contradictory selection.

Jeremy just became a father, which could mean: b) he doesn’t show up to surf the event. That’s a pretty wide scope of possibility.

Have you seen some of the edits from Mikey in WA? He matches the raw power and unpredictability so well, buuut… he’s completely untested at this event.

Killed it at Snapper, smashed R1 at Bells, landed a 13th. What will we see in the Margies conditions?

Jordy just feels shaky at the moment. He still has his board changes going on, so I’m a little shy.

Both surfers have the surfing to match this wave, and yet there just isn’t enough data/experience to recommend them outright. Which one, if any, will you pick?

It was Wade at Bells. Is it Willian’s turn?

We have two new faces in the draw with David and Kael this year. Your guess is as good as mine with this one…

We won’t be selecting any ‘numbers’ or ‘stats’ teams at this point in the season, as we are putting all of our focus towards our own game. Rest assured, when FSS is up and running, we’ll have plenty of clubhouse options (and prizes to match).

Have you registered for Fantasy Surf Sessions yet?

That’s it. Best of luck.
Oh, and I’ve been avoiding this where possible this year, but if you can spare some small change for site management costs, I’d be super-grateful. I’ll be running Surf-stats alongside FSS for this year, just so that we can make the transition of historical articles and information as seamless as possible without any gaps. A few dollars here or there will help me maintain my domain and hosting costs.
Thanks in advance.
See all articles
Go to Top