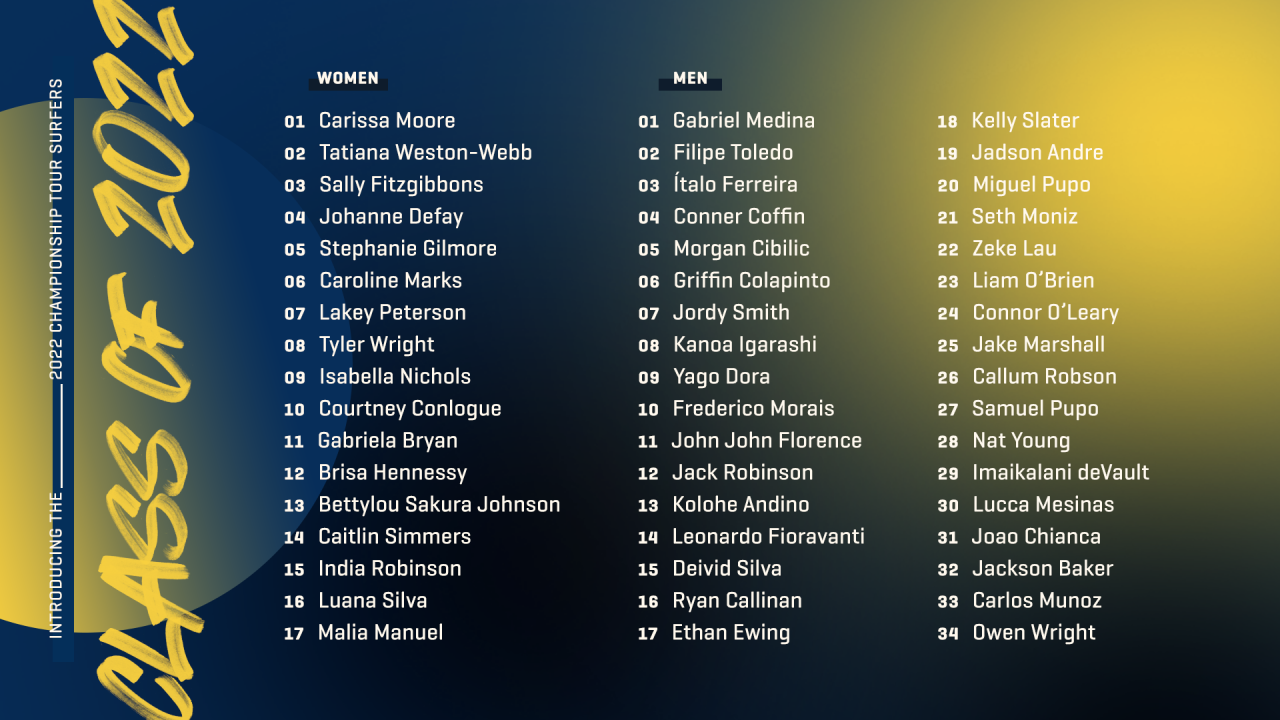 Keen to get the early scoop on the 2022 seasons? Read on to see what changes are ahead for the men’s and women’s tours.

While the 2021 season may have kept us on our toes (hello cancelled events and an inaugural finals contest), the WSL has doubled down and decided to keep modifying the Championship Tour (CT) that we thought we knew. Here’s a quick rundown of what to expect from the 2022 tours as of writing:

For the first time in WSL/ASP history, the men’s and women’s tours have the same dates and venues, making them two sides of the same coin. Speaking of coins, the WSL is offering equal prize money for both tours as well, so it’s the closest we’ve seen the two championships to date.

Remember Santa Cruz? No? Well, it’s off this year, after never really being on in 2021.

Did you enjoy the Covid-19-inspired additions of Newcastle, Narrabeen and Rottnest? Well, they’re gone regardless. The Surf Ranch is gone too, which most people seem happy about.

Tour regulars France and the Gold Coast are still missing, relegated to QS or Challenger status, while Mexico’s latest CT stint was glorious yet brief.

So, what have we got left? Well Sunset, G-Land, J-Bay, Rio and Tahiti are back on tour after being scheduled and then cancelled in 2021. Trestles is back too, first as a regular event, then as a returning finals decider.

To fill the regular-season void left by Trestles’ upgrade, Surf City, El Salvador has been added to the June slot. They should get some fun waves, but the change is hardly going set pulses racing.

Basically, there are only a few event tweaks from the original tour schedule for 2020. If we can just get through these ten events without any changes, it looks, for the most part, fairly balanced; there’s a good mix of reefs/points/beaches, there’s a balance of lefts and rights, there are heavy spots as well as waves that promote progression.

One of the biggest changes to the 2022 tour is the mid-year cut. Unlike the 2011 ‘mid-season rotation’, where the top QS surfers replaced those lingering at the bottom of the CT, this iteration seems like a genuine cut to the size of the tour. See below for the 2021 WSL press release:

“In addition to the changes for 2021, a mid-season cut will be introduced for the CT in the 2022 season. By reducing the men’s and women’s fields from 36 and 18 to 24 and 12, respectively at the season’s midway point, events can run within the most optimal swell cycles at locations like G-Land and J-Bay, as well as ensure that the stars of the sport meet head to head more frequently. “

While this seems a little harsh for rookies and surfers starting the year with a lower seeding, there’s a method to the madness; it allows tour surfers unlikely to requalify via the CT to have a legitimate crack at the new Challenger Series, which will commence immediately following the CT’s mid-year cut. It also means that they can focus solely on the CT for the first 5 events, rather than juggling the QS and CT from the very beginning.

There are three ways that you can be offered a place on tour in 2022; requalification from the previous season, qualification via the Challenger Series, or grab yourself a WSL wildcard. Let’s look at the men’s tiers first:

In the case of any withdrawals by full-time surfers, the nominated replacement surfer for the men’s tour is Matthew McGillivray (ZAF), who has already been offered a place in the Pipe contest due to Yago Dora’s injury.

On top of these, there will be two wildcards per event, selected either by the WSL directly, or through a local trials contest.

In the women’s tour, the balance is much the same, just with smaller numbers:

The replacement for the women’s tour in 2022 will be Bronte Macaulay (AUS).

So that’s the talent pool from which your fantasy teams will need to be selected. While we still haven’t locked the finer details of our women’s fantasy game, our men’s competition has continued to grow, with continually refined features such as adjustable surfer comparisons, built-in statistics, and our best prize pool to date.

So check the finer details of how to play, join a clubhouse, watch for our detailed contest previews, and lock in your team.