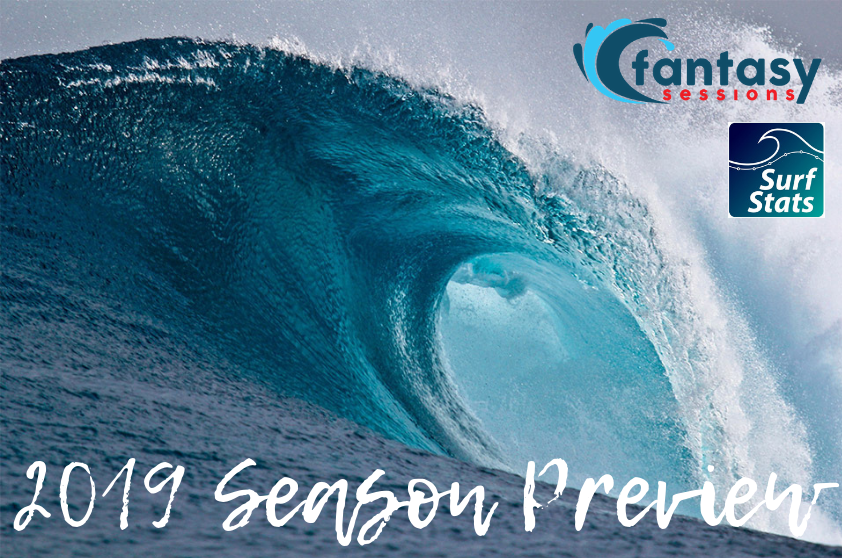 The new WSL season is upon us. Before we dive in for another 9 months of pro surfing across 8 countries and 770 heats (men and women), we thought it might be worth covering the various changes that 2019 will bring.

Of course we’re opening with this.

If you played FSS last year, then you’re already a legend in our eyes. We were stoked to have been able to share our early version of the game across the final few events of the 2018 season, and we valued the feedback that we received. We’d also be the first to admit that it wasn’t the best game.

Not only are the stats vastly improved, but the gameplay (from substitutes to scoring), prizes (those 3D fins are amazing and there are more things in the works) and user interface (click-and-drag selections, layouts and player bios) are all up there with the best fantasy games around.

We’re on the cusp of some big sponsorship and prize deals, and we’re excited about working with grass-roots surfing initiatives to support the sport that we love.

If you haven’t checked out Fantasy Surf Sessions yet, or you haven’t sussed out the improvements since last year, then log in and see what you’re missing, before trading closes

Mick and Parko, the two elder statesman of Australian pro surfing, have hung up their jerseys and moved on to their post-tour lives.

Frederico, Wilko, Connor O, Hermes, Pat G, Mikey Feb, Ian Gouveia, Miggy and Keanu all missed the cut in 2018, and have been relegated to the QS scrapheap. Similarly, Sage Erickson and Keely Andrew will be reliant on wildcards or injuries to see the big show this season.

Keiran Perrow has stepped aside as the commissioner for the men’s tour, after 6 years in the role. He will take another, undisclosed role for the WSL.

There are a few familiar faces returning to the tour in 2019: Slater, John John, and Tyler Wright have been granted commissioner wildcard places for the season, Ryan Callinan, Ricardo Christie, Jadson Andre, Jack Freestone, Leonardo Fioravanti and Paige Hareb have all managed to eek their way back into the fold, while 90’s surf video star Pat O’Connell is back, replacing Kieran Perrow in a slightly modified role as ‘SVP, Tours & Head of Competition’.

There are also a few new faces on tour in 2019. Mikey Wright and Macy Callaghan will make their ‘rookie’ debuts, despite spending more than half of 2018 on tour. They will be joined by rookie additions Seth Moniz, Peterson Crisanto, Deivid Silva, Soli Bailey and Brisa Hennessey.

The replacement surfers for 2019 will be – in order – Caio Ibelli (ahem), Frederico Morais, and Ethan Ewing for the men, and Keely Andrew and Sage Erickson for the women

While we didn’t end up with the rumoured ‘finals series’ decider in remote Indonesian archipelago, we didn’t lose Pipeline at year’s end due to admin errors either. There have still been a few major adjustments to the tour.

In order to avoid the ‘shark season’ off the West Australian coast, the WSL have swapped the order of the Margaret River and Bali pro contests. Otherwise, there is little change to the men’s tour in 2019, despite all of the rumours; there’s still no Fiji or Trestles, the wave pool remains, and the QuikPro at Snapper Rocks missed a massive cyclone swell by a few weeks.

The women’s tour has nearly completed its ‘core efficiency’ merging process with the men’s schedule, with the first 10 events now identical to that of the men’s. The always-excellent Maui Pro will continue to replace the Pipe Masters on the women’s tour for 2019.

This change was slightly left field.

Less than 3 weeks before the start of the 2019 season, the WSL dropped some significant changes for CT formats. On the back of eliminating R5 last season, the WSL have continued tinkering with the elimination format in the hope of improving the tour.

So what’s new? Let’s start with the men’s draw:

Despite seeming more bloated than the previous format, there are actually the same number of heats as before (47). Plus the WSL has mentioned an intention to utilise the ‘Slater’ format of overlapping heats more often in order to save time and get the most out of swells. Also, the man-on-man format from R3 onward guarantees that the top seeds can’t meet early in the event (the previously used 3-man heats in R4 added a random element beyond their control).

You truly have to suck to be eliminated. Two-out-of-three surfers ‘win’ their heats in rounds 1-2, meaning that those who get a dirty turd must truly be off their game. It’s also worth mentioning that having the same number of heats as before isn’t necessarily a good thing; if they had the wherewithal to drop the tour to, say, 24 surfers, they could run an event in 2 days and maximise the best of the conditions.

Generally speaking though, the changes aren’t awful. It’s evidence that they’re trying to improve things, and I’m looking forward the seeing if the reward for a second-place ‘win’ in round 1 could possibly spice things up.

The women’s event received the same treatment, however their original format lent itself more to the change, so the variations are not as apparent.

Like the men, the top two surfers in R1 progress to R3. Round two has only two heats, and again only the last-placed surfer is eliminated (for a 17th). This means that, for 8 heats and 2 rounds of surfing, only two surfers are eliminated.

Round 3 will look also different, so that, like the men, all surfers are reseeded and one-on-one heats guarantee the separation of top seeds towards the finals.

Well, the season’s less than a week away, so you should probably lock in your fantasy teams – or at least put in some preliminary picks before the wildcards are announced and the forecast is more reliable.

Our event preview will drop in a few days. We’re also filming a fantasy preview video with Brad Gerlach in partnership with Fantasy Champions League soon, so watch out for that.

Other than that, just soak it up; the off-season is done, and the tour is back, baby.