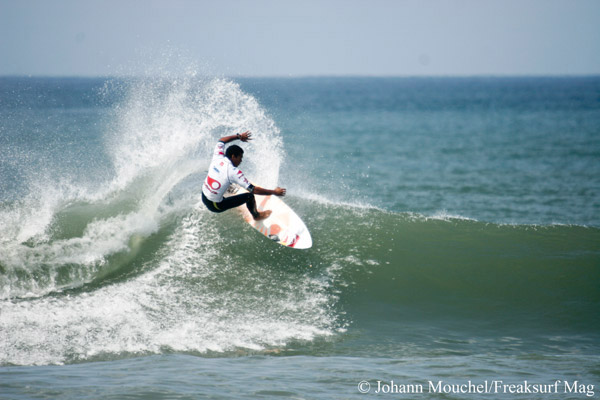 Officially welcomed to the show this year is Wiggolly Dantas, a member of the new Brazilian generation aimed at staking their claim among the elite.  Like the other meninos on tour, Dantas is well rounded and suited for any conditions, capable of dropping big points from the air or behind the curtain.

Last year, Wiggolly shred through the QS, notching a 3.92 REA in 51 heats for 556.07 TFP.
He made QF or better four times and earned a scorching 24 QSF, winning the Quiksilver Saquerema Prime over fellow rookie Keanu Asing and taking second at the Volcom Pipe Pro only to Kelly Slater.  His hard-luck CT appearance slotted him against reigning Champion Mick Fanning, who only beat him by .83 in R2 of the Fiji Pro.  If I were a border-line guy on the CT rankings, I would be very, very scared of Wiggolly Dantas in 2015.

Surf:       Anywhere with a good R1 matchup – which won’t be early.  It’s always good to let new guys prove that they can perform with the pressures of the CT;  early in the year they will be seeded against last years top dogs.  Look for Dantas to go up against Gabriel Medina in CT #1, but expect him to slowly separate from the pack as 2015 moves along.  He should be picked up in his first mid-tier R1 seed event.  Our prediction for best early value (before price surges): CT #4 Billabong Rio Pro.

Beach:     Early 2015.  He will go up against Gabriel Medina, and while our model predicts a lackluster Australian leg for the reigning champ (don’t overspend on him!), there will be a lot of proving to do – to the world, as well as himself.  Don’t expect Dantas to back down though, he is more than capable of taking a heat from Medina.  While we officially don’t recommend you grab him for the Gold Coast, consider Dantas a high risk/high upside pick due to his low price – he would likely pay off with a R3 berth .